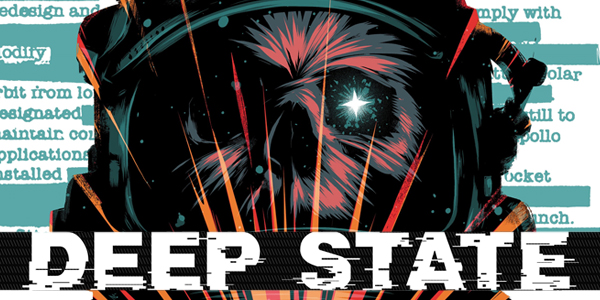 BOOM! Studios released Deep State #1, a new series from writer Justin Jordan, artist Ariela Kristantina and colorist Ben Wilsonham. The premise is that the series will follow two very special agents who work for a secret organization that deals with situations that have gotten out of control, which cannot gain the attention of the public. When they do their jobs right, the rest of us never know anything.

The series starts with the image of a spaceship hurtling towards Earth and an explanation that despite how hard we work to keep secrets, they always have a way of coming back to haunt you. We see the ship, which resembles the nose cone to an older style spacecraft used back in like the Apollo missions. Once the ship comes to a rest, the hatch is thrown off with gusto, and we’re left with a pair of glowing eyes emerging from the cabin within.

From here, we’re introduced to one of the story’s two point of view characters, Ms. Branch, who is currently working an old, cold case late into the night. Her supervisor orders her to head home, which she agrees to with no resistance. With an armful of documents, she manages to open the front door to her place, and into her home. She notices something’s not right, but keeps a cool hand as to not raise suspicion. It’s when we see her reaching for her pistol that we’re met with a new voice, asking if it was hard for her not to react right away to his presence.

The man talking is John Harrow, and he has a knack for the dramatic and his eye on Ms. Branch as a candidate for his organization. He currently works for whatever organization he needs to be affiliated with, to which Ms. Branch is shown by receiving a call to confirm Agent Harrow is with the NSA. As they put it, the same would happen with the CIA, the ATF, or the Boy Scouts. What he really does is ensure the secrets of America stay secret, and the organization he works for is an organization that we should never hear of. He claims he knows who shot JFK, what really causes cattle mutilation and what Tesla’s last project was before they drove him insane. They also have a supercomputer that roots through people’s personal files to identify new candidates for employment, and Ms. Branch was the name it selected. You could say she was given a choice to join, but the computer deemed little deliberation was necessary. The computer was right.

Once’s she’s in, we’re given a little more info as to what that spacecraft at the beginning of the story could be. John talks about the moon landing in 1969, and how it really wasn’t the first landing. Truth is, the Commies were able to get there a whole five years prior, but their mission was met with peril. None of the astronauts were able to return and the radios just went silent. Turns out the lifeless rock wasn’t so lifeless, so they decided to bury the information and hide the failure. When the US went up, they came prepared…with flame throwers. Would flamethrowers work without oxygen in the air? Whatever, moral of the story is is America rules, Commies drool, but what we “know” about the landing actually took place after the first moon landing. Why? US needed a win, and it was good for morale.

The story jumps to Bedford, PA and the site of the crash from the beginning of the issue. We see two bumbling, backwater cops arguing over what went down in their very rural part of town. While the two think they’re alone in the forest, they’re surprised by the sudden appearance of Agent Harrow and Agent Branch. It seems some time has passed, at least enough time for Agent Branch to change into something more Men in Black-ish. I love that Jordan decided to call attention to this within the dialogue, which instantly credits some of his inspiration. Besides, as Agent Harrow puts it, the only reason they’re in black is because it’s slimming. The pair say they are with the Air Force, and they’re here to retrieve a drone that went haywire. Branch leaves Harrow to talk with the officers while she explores the inside of the spacecraft. On the other side of the open hatch door is a 1960’s style cockpit covered in swirly blue goo. Luckily this isn’t Harrow’s first rodeo, and he’s able to tackle Branch to the ground just before the cockpit explodes in a fury of fire.

How did Harrow know? He didn’t, but what he does know is that this isn’t the site of a crash. It’s the site of a landing. Something purposely flew that craft and safely landed it on the surface, then left. What they had found on the moon was intelligent and hostile, so the fact that the pilot survived suggested the existence of a trap. Branch isn’t too happy about not being warned. As she storms off in a huff, something catches her eye. There’s a fresh boot print in the mud, and it’s headed in the direction of civilization.

On the next page, we see a country style home in the middle of the woods. Inside, a couple of teenagers prepare for coitus due to the girl’s parents being out for the night. They are startled by a thump, but agree it’s not her parents because they are an hour and a half away. Suspecting a friend, the guy goes to the door in his boxers and stands tough at the door. On the other side isn’t a friendly face however, it’s an alien, space Commie, covered in blue tentacles. The last thing we see is the tentacles spreading from the sleeve of the space suit into the face of the panicked teenager.

Deep State #1 may not be the most original premise, but the plot feels fun and adventurous. The art for this series is pretty good. There are a few panels where some of the facial expressions seem off, causing the face to look strange. One in particular of John makes him appear disfigured, but I imagine it was unintentional. There were some other spots too that I felt the eyes looked a bit too wide, but all in all, these are small nuances that are made up for by the haunting image of the alien astronaut converting the kid with its blue feelers. What really drew my attention to the series was the bad ass cover illustrated by Matt Taylor. I hope they continue working with him for the duration, simply based on some of the teaser stuff he’s released for upcoming issues. The series insists that they will explore more conspiracy theories, but for the foreseeable future, it looks like their main concern is the Russian spaceman that’s terrorizing small town Pennsylvania. I’ll check back in when Deep State #2 is released on December 10th.