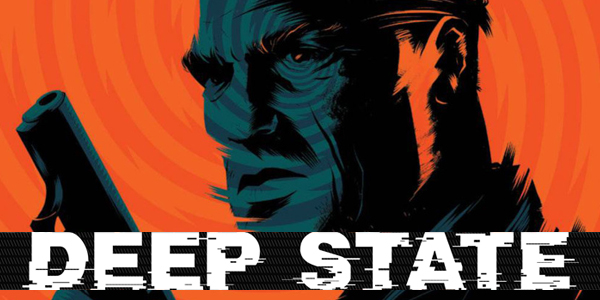 A crazed Cosmonaut is assembling an army of bloody eyed zombies in the latest from BOOM! Studios’ Deep State.

BOOM! Studios released Deep State #2 earlier in December. It’s the continuation to writer, Justin Jordan’s peculiar story about a crazed cosmonaut. Working with him on the art is Ariela Kristantina with Ben Wilsonham on colors. The story picks up right after the last issue, and starts by finding a strung out looking woman with blood tears being pulled over by the cops.

The Skinny
Deep State #2 is pretty spooky. It has an X-Files feel to it, especially with the Mulder and Scully like partners of Branch and Harrow. The pair are on the hunt for an alien lifeform that came crashing down in the first issue. They stay one step behind, following a trail of destruction as the alien dissects his surroundings to learn their inner workings, including the body and skull of the poor dude from last issue.

The Good
So far, I’m into this story. Since picking up Spread, I’ve become a fan of Justin Jordan and the scary concepts that he depicts. I don’t feel a connection with Branch and Harrow yet, but I am enjoying experiencing the early days of their dynamic, and watching it grow. Especially with the puzzling decision made in the last few panels. The imagery in this issue is creepy and colorful. Kristantina plays with some interesting perspectives, and I especially liked the birds eye panel of them clearing the room. Also, seeing the crucified science project for the first time made me gasp a little. Between the blood and the sparks, the image is so striking that I couldn’t help but stare for a bit. I’d also like to point out that Matt Taylor has illustrated another eye catching cover, which I’m sure has attracted some readers just with his art.

The Not-So Good
I’m not necessarily a stickler for detail, but I do think it’s important on the page. When done right, it’s the subtle details that keep the mind rooted in the story and the reader engulfed in the art. When I catch things that go missing or are left out, it drops me out of the story. Things like having the word POLICE on a cruiser in one shot, then having it completely missing in the next panel. It’s small, and it doesn’t effect the story, but it sticks out like a sore thumb. A lot of the art is really compelling, it’s just a few places where you can notice some lack of attention to detail.

The Decision
I still really like Deep State despite my small gripes with the art. The story is intriguing and weird, with hints of zombie hordes. The glowy eyed cosmonaut makes for a pretty intimidating antagonist, and they keep him ambiguous enough to cause increased interest. I’m also interested in watching the relationship between the two agents grow, and maybe even seeing the softer side of Branch eventually wash away. Be sure to grab the next issue of Deep State when it drops later this month.