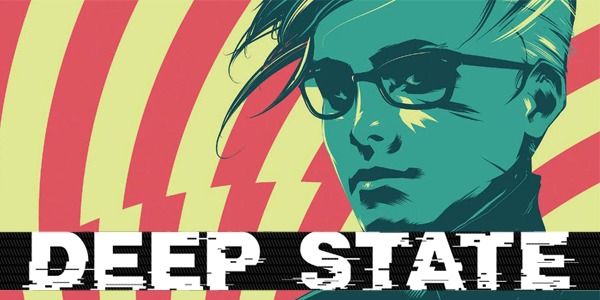 The slithering spaceman is expanding its hive mind influence. Will Harrow and Branch be able to stop it before it learns too much about us?

BOOM! Studios released Deep State #3 earlier in January. The series is written by Justin Jordan with art by Ariela Kristantina and colors by Ben Wilsonham. We’ve been following the new partners of Branch and Harrow as they slowly unwind the crazy case of the creepy cosmonaut. We left Branch coping with Harrow’s tough call, but as we pick up the story we learn he had his reasons.

The Skinny
The creature filled cosmonaut has expanded his influence greatly, resulting in the ever growing army of mindless drones. By doing so, the monster is learning and becoming more deadly. Branch & Harrow are left to make tough calls and dumb decisions in hopes of saving the world.

The Good
The art continues to be both exciting and aggravating.The scene at the beginning of the book showing the aliens connecting to the brain was so colorful and eye catching. They keep a high level of excitement through a lot of the issue, with both heroes ending up in precarious positions at different points. Also, learning why Harrow had to make the tough call kill struck a chord. I hadn’t even considered what was really going on, and now understand fully why a quick decision was needed to be made. Eventually we see Branch being forced to make a similar decision, showing she’s evolved by the issue’s close.

The Not-So Good
Some of the art is confusing, and I have a hard time discerning what is going on in the scene. For example, at one point there is a guy attacking a car. The creative team includes a couple versions of the attacker in the scene in an attempt to build movement, but what results is a cloning look and a perplexing panel. Varying the opacity, or at least making the ghosted images less dominant might help to improve the clarity.

The Decision
Although I might not agree with all of Kristantina and Wilsonham’s artistic choices, the overall issue is good. Harrow is a man’s man, willing to sacrifice it all for the greater good. I want to see if he’s man enough to go nose to nose with the slithering spaceman when Deep State #4 hits the shelves.