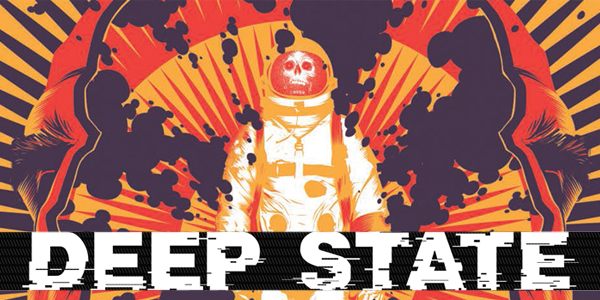 Harrow faces off against the cosmonaut while Branch tries to remedy by radio.

BOOM! Studios released Deep State #4 earlier in February. The series is written by Justin Jordan with art by Ariela Kristantina and colors by Ben Wilsonham. At the end of the last issue, Harrow gave himself to the horde in hopes of learning their true purpose. It doesn’t seem to be going well.

The Skinny
Harrow goes toe to toe with the cosmonaut so he can learn about his enemy. This means being dragged in by the alien’s supporters and threatened with assimilation. Meanwhile, Branch dissects some of the spaceman’s tech to see what’s really controlling these people. Will Branch be able to make it to Harrow in time to save him from the hive mind?

The Good
The end of the first arc comes to a fiery conclusion, that I wasn’t anticipating. The altercation with the cosmonaut is really exciting and riveting, all leading up to a cliff hanger twist from nowhere. It exposes a whole other side to this thing, with plenty of possibilities to go. I’m going to go out on a limb and say we can’t trust this Branch.

The Not So Good
Most of the art is really energetic and eye catching, but still some of the faces seem too rough and rushed. Some don’t even appear human, however I’ve noticed an improvement over the first issue which is the important part. In terms of the story, I thought the ending was a little rushed. The aliens were learning so much about us, but not enough to counteract a simple radio jammer. Also the bit about Harrow’s mind being a dark place seemed too convenient at the time, but could be an interesting little bit of foreshadowing, given the cliff hanger.

The Decision
I was on the fence about this series, thinking that it was just a little too similar to the X-Files, but the twist at the end revitalized my interest in the story. I was a little bummed to learn the threat was little more than a virus, but I’m still on board to learn more about this version of Harrow. And if the pair have to go on some other extraterrestrial missions before we find out, I think I’d be ok with that too. Deep State #5 is out April 8.