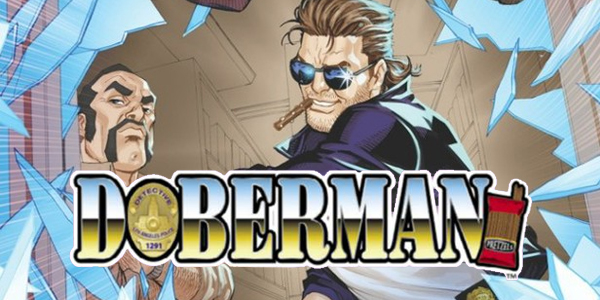 He slams Budweisers while driving, he’s bad ass cop that don’t take no crap for no one, and he’s got an appetite… for pretzel rods.

He’s Frank “Doberman” Doberano, LAPD, and he’s IDW’s newest hero. Put out by Darby Pop Publishing, with distribution by IDW, Doberman #1 has a good size team of people working on it’s pages. Scott Marder, Rob Rosell, and Jack Lambert are writing the story and Brandon McKinney is doing the art. Doberman #1 is being billed as an action comedy and would fall somewhere in between Beverly Hills Cop and Die Hard.

Doberman #1 starts off with a trip to the past. We travel to “back in the day” Los Angeles where we meet up with the man himself. Doberman pulls into a convenience store for some supplies. After grabbing some essentials (you know like condoms, beer, mustard, and the latest skin mag) and doling out some dental advice to a cute blond customer, he makes his way to the counter. Currently there are two guys trying to strong arm a robbery with a shotgun, but Doberman pays them no mind and approaches the counter to pay for his goods. Some wise ass dialogue ensues, but you can’t argue with results. Both crooks go flying through a plate glass window as Doberman “takes out the trash”. Then it’s a quick trip to the restroom with that blond he helped out earlier, a chat with reporters, then back to base.

Doberman is living the dream. Women want him, men want to be him. He’s got a big ass partner with a mullet named Hawk, and he can shotgun a beer using his cornicello necklace. Then another cop named Tomkins has to go and open his big mouth, foreshadowing the day when Doberman’s dream would come tumbling down. Hawk and Doberman get the call that there’s a big drug deal going down, and it’s finally their chance to nail this guy named Kane. Within moments they’re on the scene, pistols and pretzels at the ready.

Without spoiling too many of the details, the drug bust goes haywire– nothing goes the way it was supposed to. Blood is shed and Hawk is dead, but in the end, the bad guy gets nabbed. From here we see Doberman struggle with laying his friend to rest, saluting with all the bullets in his gun, then laying it down on the ground. He hitches a ride with a trucker and heads North, never looking back.

The story picks up again at present day in what we can only guess is Canada. A guy in a Canadian hockey jersey is walking some women at gunpoint, while a bearded and barefoot Doberman pleads with his new friends the bees for some honey. A scream from one of the women alerts Doberman to what’s happening, and we end with a newspaper panel saying something about a crazed woodsman foiling a Canadian prostitution ring.

Doberman #1 was an amusing read. The story borders on being too campy at times, but manages to not push it too far. Given that both Marder and Rosell have written for Always Sunny in Philadelphia, I was expecting a bit more lewdness and humor. Don’t get me wrong, there are some funny tidbits in the story. There’s a line about getting your nipples pierced as a junior in high school to freak out your dad, but for the most part nothing about the story gave me an audible laugh. In terms of action, however, McKinney doesn’t skimp on the goods. There are some pretty exciting gunfights, a run in with a starving mongrel, and some good driving scenes that keep the momentum up. I’m on board to read the second part to the story, in hopes that the balance between humor and hoopla is a bit more harmonized.