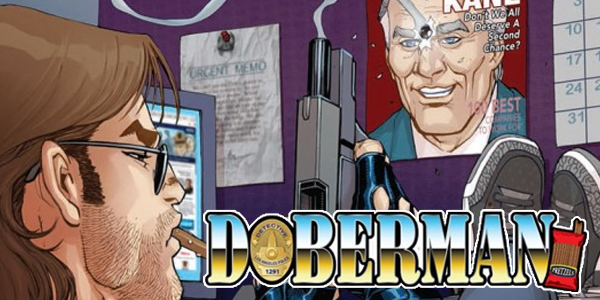 Doberman is a supercop with a passion for the ladies, pretzel logs and most of all…the law.

Doberman’s back with a vengeance in this second issue, released by IDW. The story is written by Scott Marder, Rob Rossell, and Jack Lambert with Brandon McKinney and Zac Atkinson doing the art. As a quick recap, the first issue showed Doberman lose his partner at the hands of Jasper Kane, which makes Doberman leave the force and go off the grid deep in the Canadian wilderness. Years later, reports of a crazed woodsman breaking up a prostitution ring gets back to Doberman’s Chief, which makes Chief head north in hopes of finding him.

The book opens with Chief walking up to a log cabin surrounded by a lush Canadian landscape. Soon after entering the cabin, he’s ambushed by a wild and bearded Doberman who attacks from the ceiling. Thankfully, the Chief is able to identify himself before Doberman does anything drastic. Chief tries to convince Doberman to come back, but Doberman is hesitant. So, as a last ditch effort, Chief leaves him with a care package containing a box of beers, a fresh sack of pretzel logs, his badge, and a magazine. The magazine shows Kane prominently displayed on the cover, with the quote “Don’t We All Deserve a Second Chance?”. Looks like Chief knows Doberman pretty well, because by the next panel, Doberman is seen storming into the police headquarters and demanding answers.

In the midst of his violent reunion with the Chief, Doberman is surprised by another face from his past. Tompkins promised Doberman in the first issue that he’d be there when Doberman’s luck ran out, and sure enough, he made Captain in Doberman’s absence. It’s in this conversation that the reader gets the full story on how Kane was able to win his appeal by proving his gun had a faulty trigger. Doberman starts to spout off to the Captain, but is saved by some hot coffee to the Chief’s crotch. The Chief drives Doberman to a motel for the night, and uses this time to catch Doberman up on current events. I really liked what Doberman was most curious about after his time spent in the woods. When given the opportunity, he asks if they show penises going in on regular tv yet. Priorities, you know?

After a good night’s rest in a sleazy motel, all it takes is a shave, some shades, and a snap of a pretzel stick for Doberman to feel like himself again. Thanks to the Chief, he even has his trademark sports car, which comes screeching into the police station parking lot. It’s clear that when he steps out, he’s back to the same bad-ass cop that we knew from the first issue. Doberman struts towards the front door, flaps his gums at an attractive woman in a business suit, then walks into the station like he owns the place. He’s soon brought back down a few pegs after he learns of his new assignment. Doberman’s no longer on Vice, he’s now a beat cop. He is forced to trade his leather coat for a standard uniform, and is given the office dullard Officer Newton as his new partner. The pair mount up, opting for Doberman’s sports car over the police cruiser and beeline in Kane’s direction.

The story jumps perspectives, sliding into the office of Jasper Kane as he’s finishing a meeting with a local reporter. The news report is painting him like a civic hero, but as soon as the cameras are off it’s clear we’re dealing with the same heartless bastard from the first issue. Doberman drops off his new partner on a street corner, and goes to finish his errand. In the parking lot of Kane’s company, Doberman makes a quick costume change, but is seen by Kane from his window. There’s a funny two-panel interjection of how Kane plans to turn around to make it look suspenseful, but the gesture is wasted due to Kane’s incompetent staff. Doberman barges into his office and confronts Kane face to face. Kane assures him that he’s on the straight and narrow, but Doberman doesn’t buy it. Kane ends the altercation by releasing his (not so) ferocious attack dog which drives Doberman from his office.

We catch back up with Doberman’s bumbling idiot of a partner Officer Newton, who is responding to a domestic disturbance. This interaction further explains why Newton wasn’t let out of the station. By the time Doberman gets to the scene, Officer Newton is sitting shirtless on the curb like a lost little boy. The officer’s shirt got caught in the door and the perp refused to open it back up. With some gentle persuasion, Doberman kicks down the door and then it looks like we finally get some action like we saw in the first issue. Only not. The book ends on the next page, showing Doberman walking a bloodied up perp into processing. His method outrage the new Captain, and we’re left with the two of them screaming in each other’s face.

Doberman #2 at times is entertaining and funny, while at other times seems cookie cutter and overdone. The dialogue feels natural, to the point where it feels like a movie. Kane is made to be hated fairly quickly, and I can’t help but picture the actor Eric Roberts being a perfect fit for his role. The art and colors are spot on for the style. McKinney varies his panel layouts, allowing a few to go beyond their borders, making for nice variation to the viewers. Ultimately it’s the lack of action scenes that stuck with me most. However, the teaser cover for Doberman #3 looks promising. It shows Kane (or former president George W. Bush) gasping for air while fighting off a Doberman headlock.