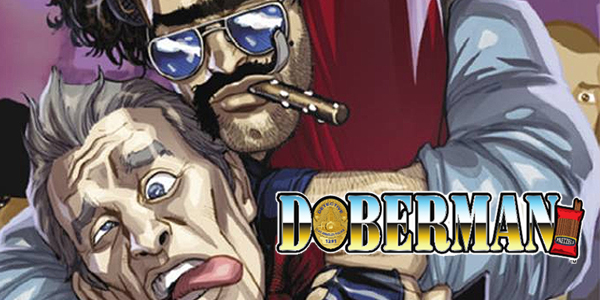 IDW’s Doberman is back to eat pretzel logs and kick butt, and it looks like he’s all out of pretzel logs.

New this week from IDW is Doberman #3, a continuation to the story of the long haired, pretzel chomping detective hellbent on vengeance. The story is written by Scott Marder, Rob Rossell and Jack Lambert with Brandon Mckinney and Zac Atkinson doing the art. For those of you who are into this story, if you haven’t figured out this is one big 80’s reference, then you were probably born after Y2K. In any event, it picks right back up with Doberman and his bumbling idiot partner, Newton, in Captain Tompkins office, talking about the drug dealer they just busted.

After a quick back and forth with the boss, we get to see Doberman use old school police work, by which I mean, beating the snot out of the perp until he confesses to anything. I enjoyed the part about Doberman punching through the phone book so not to leave a mark. After some additional scare tactics, including the worst attempt at a death bot I’ve seen, Doberman manages to get the kid to confirm that his mortal enemy, Jasper Kane, isn’t as above board as he seems. It’s clear Kane’s still into some dirty dealings, and Doberman selects himself to get to the bottom of it.

Next, we get what I can only describe as the illustration of a stereotypical 80’s montage. Mckinney draws an excellent full spread showing all the places Doberman and Newton look for dirt on Kane while also showing time elapsing. When you get to the end, you learn that they come up with squat. Frustrated by the case, and tormented by pictures of his dead partner, Doberman books it out of the station to clear his mind. After a stop by Hawk’s grave, Doberman heads to where most people go to think, the strip club. Here he’s met by the idiot Newton, who might have proven his worth yet. He stumbles onto some oddly generous donations to Kane’s charity, leading Doberman to deduce that he needs to go to the fundraiser. But how to get in unnoticed? Enter Moko Reiko.

Or not. Before Moko can make his grand appearance, Doberman gets sidetracked by the station shrink, Angie. Despite her best efforts before, Doberman proved to be a steel trap. However, all it takes is the right question, and she gets him to crack. We learn all sorts of stuff about this dynamic character in a very brief amount of time. Stuff like how he used to drink from the toilet and how he once wrote a manuscript about the life and times of Thomas Edison, but with an erotic lens, so you know, all normal stuff. When it’s all said and done, Doberman feels better getting some weight off his chest and you can’t help but suspect that Doberman’s train will eventually pull into her station.

But enough of that soft, feel good crap, let’s meet Moko Reiko. An undercover persona, created by Doberman, that once was used in an attempt to bring down an illegal barbiturate ring in major league baseball. It’s mostly a jheri curl wig and a pedostache, but it seems to be convincing. After a night of heavy handed undercover work as the world’s worst waiter and then Doberman choking out the guy that was supposed to be his boss, he eventually puts the pieces together. Kane is moving drugs into the country using the dDoberman is back to eat pretzel logs and kick butt, and it looks like he’s all out of pretzel logs.igs he’s rescuing. But there’s one catch, Kane knows exactly who Moko Reiko really is.

I read plenty of other comic books for deep, thought provoking stories that make me question our existence. Doberman is clearly not one of those. However, it is a light-hearted cop drama based around a guy that’s part Brock Sampson and part Archer. The art is fitting to the story, and makes good use of balancing the high energy action with the low energy dialogue. There was also some clever use of time progression that I enjoyed in this issue. So, all in all, I’m on board for the Doberman #4, mostly to see Doberman kick the snot out of Kane for using dogs as drug mules.