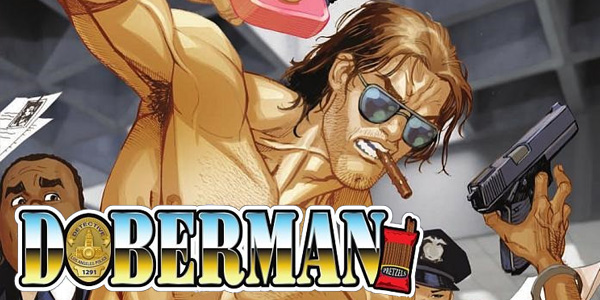 Doberman‘s back in his birthday suit to beat the bag out of a guy with some soap on a rope.

Last week IDW and Darby Pop Publishing released Doberman #4. The story is written by Scott Marder, Rob Rossell and Jack Lambert with Brandon McKinney and Zac Atkinson doing the art. Before we can get to the scene on the cover, our point of view character, Doberman, needs to catch an ear full from his superior.

We pick up the plot with Doberman in the Chief’s office. The Chief is snacking on spoonfuls of Sanka instant coffee while they talk strategy. In the last issue, Doberman thought he had the leg up on his nemesis Jasper Kane, but as he’s met by Captain Tompkins, he learns Kane knew who he was the whole time. Tompkins accuses Doberman of harassing Kane again, dressed up as a Puerto Rican waiter. Doberman corrects him, saying that Moko is really from the Philippines, but what’s really going on here is that Doberman can’t seem to get a lead on this guy. Also, Tompkins thinks Doberman is a vigilante punk with no regard for the law. Doberman ends the conversation by storming off towards the bar, taking his bumbling partner Newton with him.

A few interesting things happen during their night out. We learn Newtown has a fake ear and is afraid of nipples, mostly because they looks like little bleached prunes. Once we get that out of the way, we also see Doberman run into Angie, his police designated shrink. Doberman clears the air by admitting that he would very much like to fornicate the good doctor, but in an attempt to grow something more substantial, he expresses that he was wrong to quickly judge her type of work. He also admits to feeling better because of it, but he would still like to bang her though. We see Doberman shake it on the dance floor while Newtown tries his hand at wingman. Newtown tells Angie about Doberman’s huge package, and how his looks like a little baby pink mouse. Compelling content here. Ultimately Doberman manages to keep it in his pants, which impresses Angie a little, but instead of making a move, Doberman instead rescues his mouse membered friend who is hammered and shouting about his package.

Next day, we catch up with the boys in a public bathroom, nursing Newton’s hangover. At the same time, Doberman is fitting him with a wire, so that Newton could go down to Kane’s pet foundation and get the dirt Doberman isn’t able to. The ruse is that Newtown is interested in adopting a dog, to which the staff at the adoption center are eager to assist. Once inside, things quickly turn hectic when Newton starts to get cold feet compounded with hazy brain from the night before. In a panic, Newton asks the nice woman who is helping him to show him the bathroom, because he has the diarrhea. Newton wants out, but all it takes is a few supporting words from Doberman, and he’s back at it. From the bathroom, Newton finds his way to an unmarked door and lets himself in. On the other side is a couple of thug types counting stacks of cash. They aren’t eager to see him walk in, and become very suspicious of his “hearing aid”. But sure enough, Newton’s whole ear comes off, confusing the hell out of the dude in the suit. Doberman thinks his pal’s in trouble, and he comes storming towards the front door with five guns of various styles stuffed into his already snuggly fit jeans. But as he gets to the door, he learns it’s not needed. Standing there in the lobby is Newton, unscathed and holding a puppy. Newton pulled it off. He was able to get info about a pit stop the dog trucks make, which they assume to be a drug stop. But when they bring this to Captain Tompkins, he is refuses to help them. Tompkins thinks Doberman’s way out of line, and reminds him that if Doberman tried playing by someone else’s rules once in a while, he’d have less dead partners. This obviously doesn’t sit well with our dog Doberman.

The next part confused me a bit. I thought it was a flashback at first, but I guess in an attempt to blow off some steam, Doberman hit the weights. While this is happening some punk manages to distract an officer and get his gun from him in the precinct. Doberman makes it to the shower by the time the guy is holding the detective hostage. He gets all the officers to drop their weapons, but wasn’t ready for what was coming his way. Doberman, sporting only a towel and a soap on a rope, starts to square off with the guy. He wields his nunchuck soapy rope, but it proves little match against a taser. However, surprisingly the taser seems ineffective on Doberman superior machismo. Doberman responds with an attack of his own by picking up the towel he was wearing, twisting it up, and snapping the gun away with a rat tail. This allows the opportune moment for a kick to the punks face, causing him to spit Chiclets. The act of heroism earns Doberman a press conference in his honor, and an audience with the Commissioner. It’s not too long before he asks Madame Commissioner for the clearance to go after Kane, which she grants him.

The Commissioner spares no expense, setting Doberman up with a full strike squad, but when they’re finally able to surround the truck, they’re surprised by its contents. There’s no drugs or money or anything illegal in the truck, just some dogs in cages. Kane shows up with Tomkins, to rub the salt of defeat, but he’s cut short. The Chief comes barging in, guns blazing, and whacked out of his mind. Then with a spasm and a GAH! he grabs at his arm and collapses, closing out this issue.

I go back and forth on whether or not I like this series. Parts of each issue are amusing, or suspenseful, but the overall story seems loosely strewn together and flimsy. I imagine the series is more targeted at the types of readers that can take it for what it is, and not feel the need to question the plot further. The fans of the action movies of the 80’s per se. The art is good. McKinney designs his panels to be dynamic and drawn in interesting angles. I liked the Austin Powers type treatment to Doberman’s nude scene and how there’s always something conveniently blocking the view of his package. I will continue reading this series, just to see if Tomkins and Kane are really in cahoots, and to see what crazy lengths Doberman will have to go to to take him down. Doberman #5 hits shelves January 7, 2015.