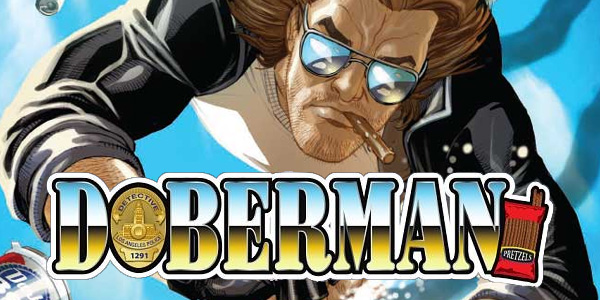 As Doberman draws to a close, will he finally get justice on Jasper or will the pretzels crumble prematurely?

IDW and Darby Pop Publishing released Doberman #5 last week. The story is written by Scott Marder, Rob Rossell and Jack Lambert with Brandon McKinney and Zac Atkinson doing the art. We left our hero Doberman holding the Chief who was suffering from a heart attack, after another botched attempt at trying to bring down Jasper Kane.

The Skinny
Despite insurmountable odds, Doberman gets one more shot at Jasper Kane. One more chance for him to bring down his nemesis without Moko’s help. Doberman appears to be a changed man, thanks to his new partner and his therapist, but will it be enough to unravel the doggone drug plot?

The Good
The art is on point yet again, with the creative team illustrating this silly buddy-cop drama to a T. I imagine that most of the readers on board with this series, are really in it for the action sequences, which this issue especially delivers well on. The boys popping out of the trunk then going back to back was excellent and exciting to read through, and the part with the dog at the end? Fantastic, and a great panel showing Doberman conquering his fears.

The Not-So Good
My complaint about this issue is my complaint about the entire series. It felt very rushed, and buttons everything up too conveniently. Some of the panel pacing was especially quick, changing locations without much warning. There was also some visual gaffs, like Jasper looking bone dry seconds after getting out of the pool. And spoiler alert, but I saw Tompkins’ turn a mile away. But again, I’m probably not the target audience for this series. Some meathead who’s really into low hanging fruit and action scenes is going to pick this book up and love it.

The Decision
I had a feeling about what I was getting into when I agreed to review the first issue of this series. Now that we’re at the end, I must say I’m glad it’s done. With a story that could have built more comfortably over more issues, paired with a bipolar hero in a leather jacket, Doberman is a perfect story for anyone looking for a book like their favorite Beverly Hills Cop movie. There are interesting characters and the action scenes are pretty great, but the majority of the story feels like they hid it where Jasper Kane hid his drugs.