Indie publisher Rare Earth Comics from Hartford, Connecticut, just released a new graphic novel following the adventures of a determined doctor/sea captain, his trusty dog and his mysterious newfound accomplice. This combination of steampunk and Allan Quatermain makes for a fun (and sometimes deadly serious) romp on the high seas. Read on for the full review!

When first looking at the cover of Doctor Atlantis, one might expect a swashbuckling adventure in the vain of H. Rider Haggard, and one would be partially right. There’s plenty of action and bloody combat throughout the book, but what some might not expect is the deep and emotionally rich story that Ian Ally-Seals has wrapped around it all. The story chugs along faster than the main character’s steam- powered ship, but plenty of time is given to dissecting the characters and revealing a bit of backstory as well.

The book begins with a young man stranded at sea, his boat destroyed and his only hope for survival a makeshift fishing pole. We don’t know how long he’s been stranded out there, but before we can even ask ourselves that question the poor guy is attacked by a giant crustacean (or “Lobstrocity” as Ally-Seals calls it in one of the best bouts of neologism ever) and bitten in the shoulder.

He is quickly rescued by Dr. Julius Fowler, the stoic but flawed captain of the gigantic British far-sea exploration vessel The Atlantis. Ally-Seals establishes immediately that Fowler is a lonely man who talks to himself often, and is probably thrilled to have some company on his ship even though they don’t speak the same language. In one of the book’s most humorous scenes, Chosot (the native boy Fowler rescued), remarks that even though he has learned some basic English, Fowler hasn’t bothered to learn any of his language. Fowler, in all of his British snootiness, doesn’t quite know how to respond.

It takes a little bit longer to see Chosot’s true colors — about halfway through the book’s 80 pages — but his backstory is revealed without resorting to a flashback. His past is revisited quite literally, and without giving away the biggest twist in the story, I’ll say that it takes a pretty dark turn at that point. We learn why he was out in the middle of the ocean and what he was running from; not giant lobsters, but something much more evil.

Carl Mefferd’s black-and-white art captures the feel of the story very well. When cartoonishly giant sea monsters are called for, he draws one of the craziest looking two-page spreads I’ve ever seen. When more emotional weight takes its place, he draws facial expressions that perfectly convey their emotions. And when the story calls for a man’s head to get blown apart by a musketoon…well, you get the picture. 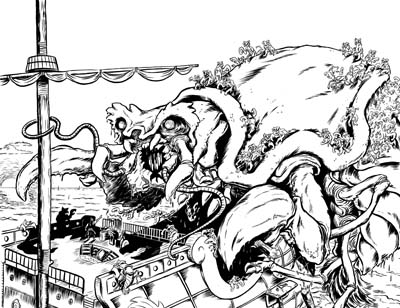 We’re left with a huge cliffhanger at the end of the book, meaning Ally-Seals has more in store for Dr. Fowler and Chosot. If you’re a fan of classic adventure stories, you’ll undoubtedly find a lot to like about this book. It manages to strike a balance between strong character development and crazy bloodletting, making it an entertaining and quick read that’s not devoid of intelligence or heart.