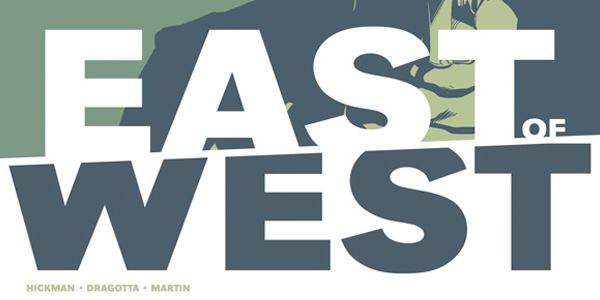 Death is a cowboy, looking to dish out blood-soaked vengeance on all those that crossed him.

I was at my local comic book shop the other day, and I noticed a cover that was differently designed that all the others. It features a shadowy gunslinger supported by an interesting title logo and a huge block of white space. The inner design nerd in me squealed. This, combined with the awesome price of only a buck (released as one of Image’s First books) made it a very easy purchase. East of West #1 is written by Jonathan Hickman with art by Nick Dragotta. I also think it’s fitting that they feature the colorist Frank Martin on the cover because when you crack it open to view the world this team has created, it’s the contrast of bright and vibrant colors with the dark and shadowy ones that create an eye-catchingly beautiful universe.

I know I’m over a year behind on this one, but once I started reading through it I couldn’t stop. If you were to try and put this story in a genre, I guess you could call it a Sci-Fi, Fantasy, Western, Mystery story. The book depicts the Four Horsemen of the Apocalypse, and starts with an explosion and some magic. We learn quickly that Death has parted ways from Pestilence, War and Famine and is on a mission of his own. It becomes apparent that the three horsemen’s mission is to find number four.

We also get a bit of a history lesson, telling a strange story about three unrelated men in different parts of the world all sharing in the same epiphany. They each deliver one-third of a message, then upon completion, drop dead. The poem speaks of the deliverer of the end of the world… who appears to be our missing horseman.

Death, the fourth horseman, is nothing short of a bad ass cowboy. He has the kind of demeanor and the delivery that could make even the Duke shake in his boots. He pals around with two Native Americans, dishing out vengeance on page after bloodshed page of violence. It is quite a sight to behold.

I really enjoyed the art in East of West #1. The panels are alive with energy and are equal parts tormented and beautiful. The visual distinctions of the Four Horsemen are spot on, with each character embodying their persona very well. The world that Hickman developed is unique and oddly segmented and could provide a large area for plot development. The book is filled with profanity, gore and some sexualized illustrations, and is a damn good read for anyone looking to get their fill of those.