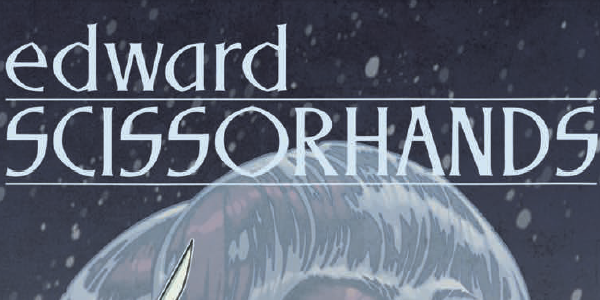 IDW’s new Edward Scissorhands series brings the tragic hero in to the spotlight for a new generation.

The original movie takes place somewhere in the late eightes to early nineties, but flashes back to the fiftties or sixties. This new volume’s story centers around Kim’s grandaughter Megan, who is now in high school and has grown up on the stories of the strange man named Edward that her grandmother Kim (Winona Ryder’s character from the original movie) used to tell her. Unfortunately, Kim has passed away, leaving her grandaughter with a host of unanswered questions about what really happened the night that Edward supposedly killed Jim. Meanwhile, Edward has been living in the same house during all this time. One day, he uncovers a secret that the Inventor left behind that may point to another person like him. Could it be that after all this time, Edward isn’t alone after all?

The original movie found a striking contrast between the pastel colors of the suburbia, and the dark and dreary world, on the hill, that Edward comes from. That contrast was made possible by the emphasis on the 1950’s atmosphere, which created a world which was slightly surreal but still far enough away from having a twilight zone vibe to be believable and have heart. This newest series pays perfect tribute to the character of Edward (played masterfully by Johnny Depp), but does little to provide an equally compelling backdrop. Drew Rausch’s art encapsulates the uniqueness of the world of Edward Scissorhands by exaggerating the features and expressions of the characters. This style choice turns everyone in to a caricature, but it also projects the same level of personality, that made the movie such a classic, even without having the benefits of the cinematic medium. Kate Leth’s script and story pays tribute to the original, and even Tim Burton himself, without going over the top with the references and tropes or depending on too heavily on fan service. Splitting the story from the perspectives of two different protagonists (Edward and Megan) ensures that both parts of the world are represented. Megan seems like a natural extension of Kim, and Edward’s current plight fits with his character’s motivations. It lacks the romantic nature of the original; but even without it, it’s still equal parts sad and sweet. It’s a worthwhile homage, with a naturally progressive and modern story with a lot of promise. As a fan you’re going to enjoy Kate Leth and Drew Rausch’s continuation to Edward Scissorhands, but even newcomers are likely to fall in love with the themes of self-realization and isolation, and the gothic-teen fantasy tone. It’s an unofficial yet entertaining sequel to a real twentieth century fairy-tale.