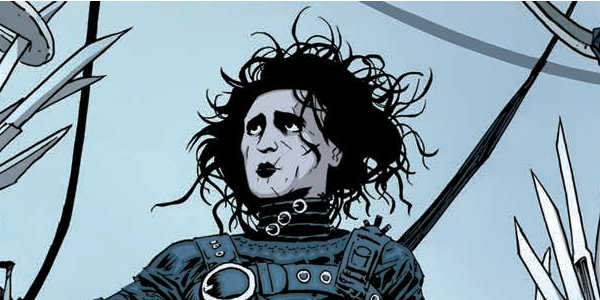 Megan and Ed have finally met face to face.  Though this particular meeting has been a long time coming it doesn’t have the impact that I feel it should.  This is partly due to the looming threat of Eli, which interrupts the Q&A session between the two almost most immediately.  I also believe that the threat that Eli poses would be something Edward would prioritize and try to recruit help to deal with.  It’s all fine, everything makes sense, but that’s part of the problem.  Everything about the story is so logical.  The fairy tale quality of the movie feels like is being wholly underrepresented in this comic book sequel; thought and emotion is replaced with cause and 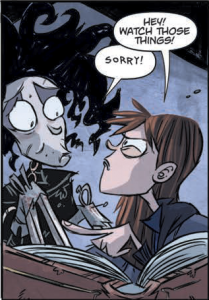 effect.  Again, it doesn’t hinder it’s own story, nor does it dishonor the movie it’s being created in tribute to, but the differences in the tones makes the transition from screen to page a rocky one.  However, the themes of the original (family, isolation, acceptance, and friendship) are just as prevalent in this comic book sequel; meaning the message hasn’t changed, even if the medium and direction have.

When Ed and Meg are together they have bouts of dialogue and characterization that also shows Edward interacting with a modern day teenager, which when you consider his shyness and social naivete, is incredibly entertaining to see.  Still, it wasn’t nearly enough to outdo the conversations between Megan and her mom, who end up having the most enlightening exchanges in the entire volume.  A great deal is revealed about both women, and it’s easy to see the different character aspects of both Kim and her mother Peg in Megan and her mother.  It also goes to show just how much effort Kate Leth has put in to developing the modern story’s progression from it’s roots.  Every detail seems to be accounted for (You can tell a fan wrote this, because there is so much love for the original within the pages).  Drew Rausch continues to wow with his unique art that captures events in the panels, whether static or in motion, with staggering detail, and conveys the personalities of the characters quite effectively.  His work with Eli continues to add incredible amounts of depth to the character, and gives emotional credence to his story.  I’ll confess that I have no idea where it could be going at this point, but I am so enthralled now that I am eagerly awaiting volume #4.

Final Word: It doesn’t maintain the fairy tale quality of the original, but it still has the same level of satire, and the loyalty to the themes of Tim Burton’s 1990 classic.  It’s very much it’s own story, admirably focusing on the present rather than the past.  Kate Leth writes real characters in both senses of the world that switch from caricature to complex in half a second; especially the characters of Megan and her mom, who are incredibly intriguing.  Drew Rausch continues to paint a comically distorted view of the world but still tones it down, when needed, to convey a variety of emotions in the art.  Though admittedly he still does his best work when the characters’ expressions are being take to extremes.  It’s worth reading for fans of the original to be sure, but it’s very much geared to the modern teenager.  It knows it’s audience and pays tribute to the original, but focuses primarily on it’s own story.  Despite the more left-brained approach in the direction, Kate Leth, Drew Rausch, and IDW’s Edward Scissorhands continues to give the fans a worthwhile successor to the original.