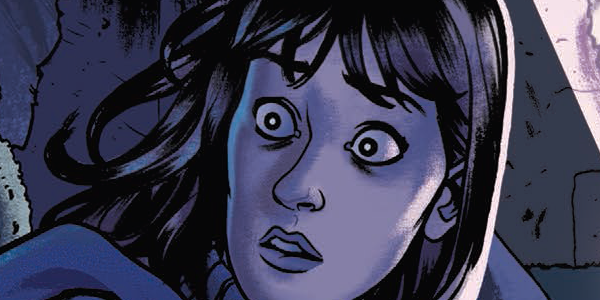 I don’t think this is a faithful representation of the world of Edward Scissorhands…but I’m having difficulty seeing that as a bad thing.

Kate Leth and Drew Rausch seem to be taking old Eddy in a different direction from what Tim Burton originally conveyed in his 1990 classic. Personally, I’m thrilled to see creators putting their own spin on established property, some of the greatest books, movies, games, etc have been reinterpretations of original material, with a few personal touches by the adapters. Such is the case with Leth and Rausch’s Edward Scissorhands, and #4 illustrates this with a vibrant world of color and contrast and personality and satire. So the themes are still alive, but the execution has become less avant garde and more pop. While the story this time around focuses very little on Edward, and much more on Meg and Eli, there’s an element of his primary themes in all the scenes in the book. Meg’s scenes drive the plot forward, and deal with the aspects revolving around fear of the unknown and the dangers of ignorance which allows the Eli scenes to focus more on characterization, and the aspects of humanity, acceptance, and loneliness.

All of Meg’s scenes are showcases of satire, and while most sting but don’t bite, there are a few that are a little too heavy handed and cliché to come off as anything more than mean spirited (the doughnut thing was a little too on the nose). There’s also a great deal of deus ex machina at work here, which keeps things moving along even if it isn’t always naturally occurring. Eli’s scenes are much more lonely and claustrophobic, and they do nothing to reveal Eli’s true intentions. The fact that his motivations are shrouded in mystery gave me a chance to see the situation from the suburbanites’ point of view, as I don’t know what Eli wants and how he plans to get it; but his actions force me to accept his possibly malevolent nature. Plus this… 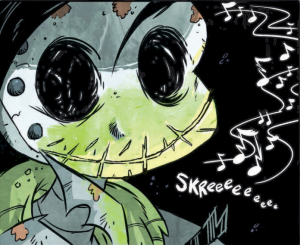 Final Word: Drew Rausch continues to gives us a more skewed and animated looking world in Edward Scissorhands #4. Kate Leth on the other hand adapts the themes of the late 20th century fairy tale, but gives the world a twist to make it more her own. It’s admirable, and it pays just the right amount of homage to its roots to keep it from coming off as heartless and soulless reboot or continuation.

It can push the outsider agenda a little too hard, making the whole thing come off as a big blue propaganda ad, but the Eli scenes balance it out with some of that good old fashioned creepy weirdness that Tim Burton has become known for. I’d hate to live in Kate Leth and Drew Rausch’s world of Edward Scissorhands, but it’s one I still enjoy visiting every month.