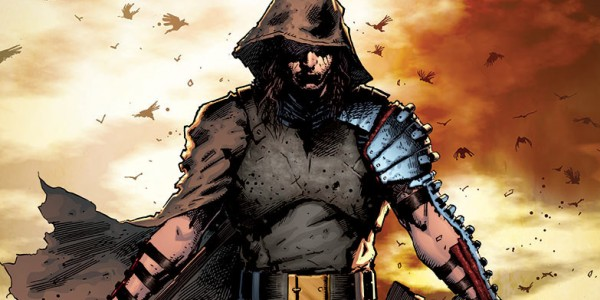 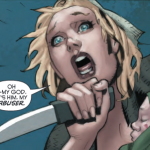 The character of Gilad definitely doesn’t have the notoriety of other fictional barbarians like that of Conan and He-Man, but his story maintains the same brutal elegance in it’s simplicity. He’s a weapon of the Earth that gets his orders from a line of Geomancers that have been active for centuries. Unaging, violent, and immortal, Gilad is world weary after committing himself to the betterment of the Earth, and yet he feels like his attempts to affect change through his bloody intervention aren’t a means to an end but simply a vicious cycle that will continue for all time. He decides to sit back and let the world continue as it will, but is then given an unusual mission to protect a child, that is to be a savior of sorts, that he is needed for. He’s curious about how a single child can change the course of the world, and decides to accept the mission. And that’s pretty much it. This is a beginning part of a three act story that introduces the characters and conflict. It’s successful at introducing the character of Gilad, but little is gleaned outside of his own perspective.  This story isn’t exactly bursting with differing points of view, so it’s more than a little slanted in portrayals of regular and downtrodden human characters, casting them as either cowards, victims (murder and rape), or committers of murder and or rape. Basically, all the colors of the bad guy rainbow are there, so there are plenty of blood-filled punching bags for our hero to go through, that won’t make us lose a bit of sleep. It’s cheap, but like I said it’s also elegant in it’s simplicity. It’s a Saturday morning cartoon for adults; Captain Planet with more murder. 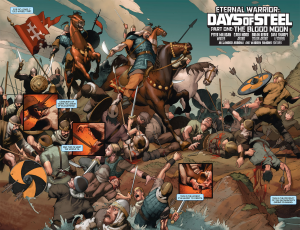 In many ways it’s a return to the loin-cloth clad blood markets of the 80’s, but since that’s a format that hasn’t had a lot of exposure lately, it’s still a good time to be had. You can’t tell this kind of story unless you have an artist that can draw horses, cloaks, and armor, but what makes Cary Nord’s art really stand out is his ability to capture a battle sequence at it’s absolute most elemental point. Battles are frozen at the perfect moment, evoking the same sense you get from paintings like The Battle of Grunwald and Thomas Cole’s Destruction from The Course of Empire series, and have the same interconnecting pieces of detail. It’s this ability to capture the brutality of battle that makes Nord’s art so successful at evidencing the rage of both the character and the time he lives in. It’s art that’s well complimented by Brian Reber’s colors which take care to maintain the tone of the story in their use. This is actually most obvious in Gilad’s most isolated moment, in a cave, which maintains both the soft light of the fire and the harshness of that single light in the dark.

The Eternal Warrior hints at themes of war and solitude with solidly conveyed scenes of violence and blood, but stays focused on the heart of the story and what makes it entertaining, in the hero murdering lots of really bad guys. The single perspective of Gilad robs the story of it’s most intellectual moments, but he still represents the simplicity of the heroes of yesteryear in a way that’s actually considered fresh by today’s standards for no other reason than no one has done it in a long time. It’s a brief, yet surprisingly entertaining reboot to a Valiant favorite, that also has a good chance of finding new fans due to it’s simple and introductory nature. I was unaware of the Eternal Warrior until I read this, but I did enjoy my first foray in to his world. I’d recommend this for anyone who grew up watching Conan, or anyone who’s looking for a more adult oriented entrance in to the fantasy genre.