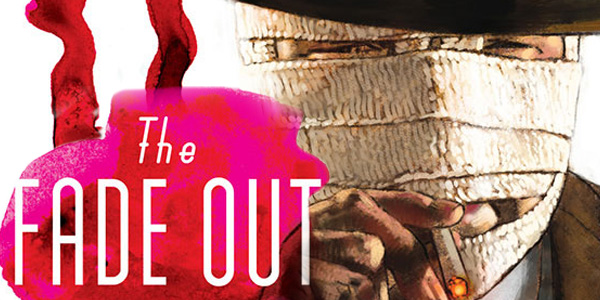 A Hollywood starlet is dead, leaving some to speculate whether or not it was really suicide in the latest issue of The Fade Out by Brubaker & Phillips.

Recently, Image Comics released The Fade Out #2, the next chapter in the Hollywood murder mystery by Ed Brubaker and Sean Phillips. Elizabeth Breitweiser is coloring this series. Issue number two is titled The Death of Me and picks up at the funeral for the recently deceased Hollywood starlet Valeria Sommers.

The people of Hollywood all seem fake to Charlie, the point of view character who feels guilty for the death of Valeria. Not in a sense that he committed the crime, but he liked the girl, and he knows she definitely didn’t commit suicide. He knows someone knows what really happened, and it’s probably one of the people at the gravesite with them. As he goes through, familiarizing the viewers with the cast, he points out the head of the studio, Mr. Thursby, and claims that his tears are more for his lost investment rather than the loss of life. Valeria was on her way to being the next big thing, and he spared no expense getting her there. Charlie has an interaction with one of her childhood co-stars and learns that her name wasn’t even Valeria, it was Jen. Jen Summers, with a U. See, everything is fake in Hollywood. Before he can leave the cemetery, Charlie spots his drunken and blacklisted friend Gil spying from behind a mausoleum. Charlie made the mistake of telling Gil his secret in the last book, a mistake he continues to pay for now.

From here, Brubaker sheds some light onto how Charlie and Gil get along. The two have a symbiotic relationship going, one where they are both reliant on the other to survive and profit. Gil ran into some trouble, some communist trouble, and in doing so got himself shunned from the industry. Charlie on the other hand is a fine, upstanding veteran who has been paralysed creatively since the war. He looks at a typewriter and all he sees is trash. So, to make money, Gil gets plastered and lies on Charlie’s floor. From there he dictates all the action to Charlie, who in turn, types it up and slaps his name on it. As long as they keep it quiet, it isn’t hurting anyone, and it allows both men to survive. Once they’re done working, Charlie pours Gil into his car and drives him home to his beautiful wife Melba, who Charlie happens to have the hots for. Melba appears to be reconsidering her marriage to the drunken Gil, but good guy Charlie puts his feelings away and tries to persuade his buddy’s wife that everything will be ok.

Back on set we meet Morty, the body double for the film’s star Earl Rath. The film they’re working on requires Earl’s character to be wrapped up like the Invisible Man for half the movie, but seeing how Earl is too good for that, his buddy Morty stands in for him. However, the wraps take a while to look right, so once they’re on, poor Morty is stuck in them for the duration of the day. Charlie fantasizes over what it would be like to wear the mask, and to fade away to the background, never to be noticed.

We get a look at one of Valeria’s scenes from the movie featuring her and Earl. The two have a very emotional altercation that results in a kiss, causing Mr. Thursby to stand up and curse at the screen. Thursby talks with the other two guys, the movie’s director Franz Schmitt and Charlie, on what to do next. Obviously all the girl’s scenes must be re-shot, and Thursby informs both men that they only have two weeks. No way it’s enough time, but Thursby insists that they can do it. Schmitt just needs to be the genius he’s paid to be. Thursby’s rough, but it works for him. Charlie takes the viewer through a bit of his background, and shows how he grew his empire from nothing but a love for movies. After the history lesson, we see one last interaction between Charlie and Franz. Franz talks his ear off about changing the dynamic of the film with the reshoot, but Charlie pays little attention. He agrees to whatever Franz was saying, then beelines home to his bottle. It’s clear he’s still torn up over Val’s death, and the fact that he has to write her out of the movie now, make her vanish, is hitting him hard. We get another flashback, this time to Val laying on Charlie’s lap in his office. Val is trying to get Charlie to save her character’s lines and ultimately her on screen time. I couldn’t tell at first, but with the last panel it’s pretty clear Val was flirting with Charlie. The two could have had a history, which would definitly make sense given Charlie’s affinity towards her.

Charlie’s daydream is disrupted by the ring of his phone. A distressed Melba is on the other end, and her husband just stormed off drunkenly. She doesn’t know where Gil went, but Charlie has an idea. On the next page, we see Charlie was right. Gil’s out at Val’s freshly dug grave, keeping her corpse company with half a bottle of booze. Once Charlie shows up and ruins the party, Gil starts getting belligerent. Gil is upset at the entire industry, and is enraged to think this girl won’t ever see justice. Charlie tries to calm him, but it’s no use. Tempers flare and Gil connects with a huge right cross, but in the end they remember they need each other, and the issue closes with an invite to the bar.

The Fade Out #2: The Death of Me is a good continuation to this gritty, L.A. Noire type murder drama. It features a very character driven story requiring it’s readers to speculate on motive and means of all the major characters. The art by Phillips and Breitweiser is on point with this style of story. The pages feature a Silver Age style artistry, that doesn’t have a lot of crazy angles and needless action. Also, similar to Mad Men, there are more panels featuring a smoker than not, which is typical for the time period. All that being said this is a typical Brubaker and Phillips book, but for fans like me, it’s a great continuation. But I’ll be honest, Brubaker and Phillips could probably pick their nose and wipe it on a legal sized pad, and I’d still probably give it a read. Be on the lookout for Fade Out #3, due out next week.