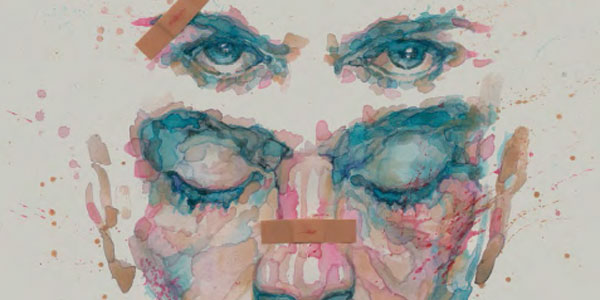 I want you to read this book as hard as you can.

At some point or another, a sequel to Fight Club was going to be a thing.  Not just because the original movie (and book) have so many fans eager to know what happens next, but because author Chuck Palahniuk has been enthralled by the awful commerciality of the idea.  Fight Club 2 was, at one time or another, slated to be a movie, a book, even a stage musical (!!!), before finally settling in to a new first-time medium for Palahniuk… the comic book.  The author has teamed with Dark Horse Comics and artist Cameron Stewart to finally make Fight Club 2 a reality, and after reading the first issue of the new series, I think Palahniuk and his cohorts are onto something.

What we have here is a story with a controlled level of callbacks to the original, some fun fourth-wall breakage, and organic yet still surprising trajectories for our main characters.  The book picks up the story ten years after Project Mayhem leveled a bunch of corporate office buildings, and in the years since Sebastian (as our punchy protagonist is now calling himself) has settled down.  With the help of a personal catalog of medications, our former Narrator has kept the monster at bay, married Marla Singer, had a son, and maintained a perfectly milquetoast existence.  Settling as best he can into suburban ennui, Sebastian spends his drug-addled days literally denying he is who he is, to both himself and any busted-faced Space Monkeys who recognize him.

If that seems familiar in comparison to where the character began in Fight Club, it should.  When your spirit animal is a penguin that tells you to slide, going backward is inevitable, and Sebastian has retreated back to a new, older version of the superfluous, Ikea life he had before Project Mayhem.  But there’s some things that stuck with him (aside from his reputation as a cult leader revered by angry bros everywhere).  One of those is Marla, who we find is, in her own way, playing along with Sebastian as his “happy housewife.”

Marla still attends terminal illness grief groups for diseases she doesn’t have, now using them as a personal confessional to vent about the smothering horrors of married life, in which she finds herself trapped.  That she lays all this out– while pining for the days when a virile, fully-engaged Tyler literally fucked her back to life– to a support group of pre-teens suffering from Progeria Syndrome is in equal measure weird, black hearted and hilarious.  When one kid ponders whether he will still be alive a year from now, Marla’s response is that her marriage most certainly will not.  I can think of no more perfect way to establish that, despite her child and her house in suburbia, and her voluntarily meek husband, Marla hasn’t really changed at all.

Obviously, the legacy of Tyler Durden lives on ten years later, but that’s not the only thing to survive.  While I don’t think it’s any sort of spoiler for me to say Tyler Durden survived that fateful gunshot to the head just as soundly as Sebastian did… I won’t go into the details and mechanics by which Durden has ensured that Project Mayhem is still very much a part of the social conscious.  Even if Sebastian has spent his years aging into mediocrity, aggressively avoiding his assumed destiny… there’s a whole hell of a lot of Space Monkeys out there, and they haven’t exactly been sitting out the past decade quietly.  By the end of this issue, I can’t say I know exactly what direction Palahniuk is planning to go with this story, but I’m very interested to find out.

The witty-yet-abrasive worldview Palahniuk has refined so keenly over the years is clear and present throughout this introductory issue; this is the first comic book in recent memory that made me laugh out loud more than once (the introduction of Marla and Sebastian’s kid as “the unpredicted consequence of sport fucking” is just such a great line).  And Cameron Stewart’s artwork is more than up to the task of matching a writer of Palahniuk’s Herculean mania.  The character designs are concise, recognizable, and only slightly stylized– Marla’s chaotic mess of a wardrobe has been filed down into a razor-sharp black powersuit, while Sebastian traded in his army for a receding hairline and a few extra inches of flab since last we saw him.  The writer and artist engage in some fun with the fourth wall, as well, with pages of the book getting covered in scene-appropriate loose pills and wilted flower pedals.  These flourishes add a certain chaotic energy to the visual storytelling, as well as a willful disregard for the medium, as these moments don’t shy away from obscuring characters, actions and even mid-conversation dialogue.

I was on board as soon as Dark Horse made the announcement that Palahniuk’s Fight Club 2 would be coming at us.  The cover art by David Mack had me a bit worried… his perpetually flowery watercolors– which certainly earned him a place among the greats of modern era comic artists– seem more like something Project Mayhem would spray paint over with cartoon penises than use to glorify their leader.  Thankfully the pretentious pastels of the cover feels like the only misstep in an otherwise very engaging book, one that promises all the bile and bitterness of the seminal classic.  Fight Club was a pretty good book, which was adapted into a great goddamn movie.  The consensus on Fight Club‘s translation into the comic book medium remains to be seen overall, but I’ll give it this right away– Fight Club 2 comes out swinging.