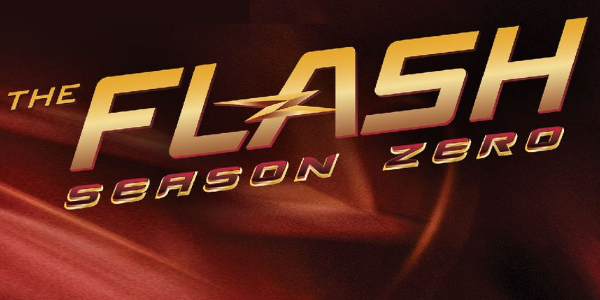 Flash Season Zero had a difficult first step with #1 of it’s Freak Show arc. But first volumes are never easy, so let’s give ’em a break as we move right in to #2 (Do I really have to say this?) “Who Let the Chimps Out?” (ugh…). Well what’s in a name, right?

Okay Barry…Did you hear that incredibly vital piece of evidence…? 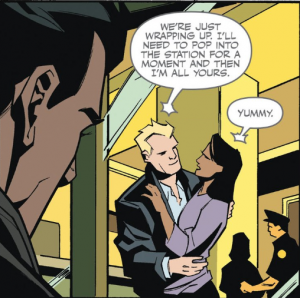 …of course you didn’t.

Flash Season Zero #2 picks up just as Barry is returning to Star Labs after a daring escape from both the Strongman and the police, where he discusses the recent event with Caitlin, Harrison, and Cisco; AND IT’S GREAT … which makes it’s brevity all the more painful. The bantering between the characters with the best chemistry (in the comic) is far too short lived unfortunately, and Barry goes back to looking wistfully at Iris as she projects how (almost maliciously) happy she is with Eddie (isn’t this a superhero comic?). Let me qualify this. It’s not that a romantic interest or unrequited love is a bad plot device. But here, and in this context, it’s cheap. I’ve said numerous times that the budget for a comic book is nearly infinite, so to have such a large majority of panels spent on such an frustrating side-plot with no real resolution is borderline theft. It’s not even the theme of romance or lack of reciprocation that makes this particular aspect of the story so frustrating, it’s the damned stagnation. Since comics are so limited in space, and their follow ups are usually much farther apart than a TV show (sometimes a month, sometimes more), it’s maddening to watch this precious space dedicated not to the development of plot or character, but the driving home of elements of sadness and hopelessness. We get that it’s unrequited, we get that she doesn’t think of him that way, so WHY are they jamming it in to reader’s heads when there are only so many pages, and there hasn’t even been a proper showing of the villain, or a lot of time dedicated to some actual…y’know…SUPERHERO STUFF!

Alright, sorry. Let’s get back to the story.

The main leg of the story is motivated by Barry’s inability figure out where The Flash ends and he begins. It’s an interesting identity crisis, and it would matter all the more if we had some insight in to why he was having this crisis by showing him actually doing something Flash-like before. It’s this lack of build up that makes this theme of identity fall completely flat. It doesn’t matter because there’s nothing for it to build upon. We haven’t seen Barry do enough to warrant this level of depression over his double life, and we haven’t seen enough conflict come from his leading two lives to really relate to this particular aspect of his character. And when you’re main theme can’t even get off the ground due to a lack of background, it’s safe to say that the rest of your story (even the best bits) aren’t going to be going anywhere either. 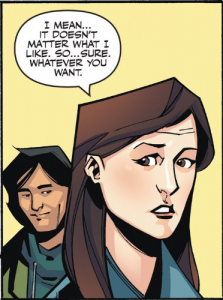 I must be watching too much anime…because this is adorable.

That’s the sad truth of #2. It’s good points are just pushed in to the sidelines while the focus stays on Barry’s unrequited love and a deep conflict related to living a double life which is only implied and therefore means nothing to the reader. On the plus side, Caitlin and Barry’s brief exchanges together are kind of cute (good lord…am I shipping?), the snake charmer is WAY more menacing than the Strongman as a villain, and the team is actually making real and practical steps to discern the identity of the Strongman and the nature of his abilities using their considerable intelligence and expertise (THEY’RE SCIENTISTS!).  So you see, the parts are there, but it’s a simple matter of understanding the difference between the comic and television audiences. On television, this unrequited love bit is probably really emotional since we can see the actor’s faces change and emote and react accordingly. But in a comic, it’s an unnecessary distraction that takes up too much space and robs you of what really matters.

Maybe this will change in “Flash Season Zero #3, aptly titled…!