A pile of inconsistencies makes the finale of the Flash: Season Zero’s Freak Show arc feel like a desperate dash to the finish line.

Do you remember these? 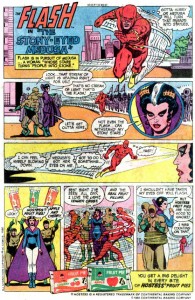 The Flash: Season Zero #8 reminds me just a little bit too much of these shameless old ads to be comfortable.  It’s in such a rush to slam together it’s ending that it doesn’t consider any limitations to develop a realistic conclusion.  It’s rushed, and so easily wrapped up in fact that there seems to be virtually no reason at all for it to have been difficult to defeat Mr. Bliss once his identity had been ascertained. In a nutshell, The Flash: Season Zero #8 completely invalidates the suspense built up in #5-#7. Inconsistencies in the Flash’s abilities create these continuity issues that will unfortunately call you back to former conflicts (If he could do that all along, why didn’t he do earlier?). It’s a problem that takes the reader completely out of of story when any attempts to ground the Flash’s abilities are met with confusion. It’s too easy. The Flash is too powerful. He wraps the whole story up and solves all of the problems of the entire series thus far in exactly two panels. Two. And he does it by running really fast. Like…too fast. Too fast for any sense of danger or suspense in prior issues to make any sort of sense. He OUTRAN THE PLOT.

Honestly, it’s the only problem with the issue, but it’s such a big problem, that I felt like everything else was just sort of a detail. The art is actually higher quality than usual, with more resemblance to the characters from the TV show. There’s even a sign off and a moral that totally works, and brings the entire point of the story full circle with it’s theme of being different. I’m still unclear exactly WHEN Season Zero takes place in the story, but it’s still a fun little romp that’s worth the money that I’ve spent on it. If you can get past the glaring issues to inconsistency and continuity relating to the Flash’s powers, and you’ve been reading them since they were first released, I’m confident you will still enjoy The Flash: Season Zero #8. The writing matches the show’s style, and there’s a worthwhile moral that is tangible and even consistent with the rest of the series, and despite how easily he’s taken down Mr. Bliss is a decent villain. I would have liked to know what the fate of the Snake Charmer was, but other than that, this one of the better volumes of the Flash Season Zero, I just wish it hadn’t ended so anticlimactically.