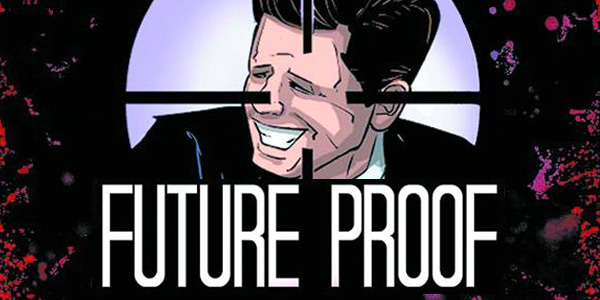 Future Proof #1 is a thought-provoking tale about two time-traveling special agents trying to correct errors in time, while not being the force that causes the deviation.

I met illustrator Alex Cormack at the Massachusetts Independent Comic Expo, better known as MICE (http://www.micexpo.org/) last year in Cambridge, MA. He was promoting an anthology called The Oxymoron Anthology, a very twisted book put out by Comix Tribe. It was clear to me that Cormack is a very talented illustrator, and I felt good supporting a local guy. Since MICE, Cormack has teamed up with writer and President of Bliss on Tap Publishing, Brian Phillipson to put out a new series called Future Proof. I was fortunate to get an advance copy of the full, colored version of this interesting take on time travel.

Future Proof, created by Brian Phillipson and Alex Murillo, published by Bliss on Tap, is a new, bi-monthly series about two special agents on a mission through time. Their journey is controlled by a powerful artificial intelligence called SING, which works as a hi-tech slap bracelet for you kids of the 90s. If you’ve seen the cover to Future Proof #1 then you won’t be too surprised that this first issue revolves around President Kennedy’s assassination. But it isn’t until we see Agents Rison and Magus take position on the famed grassy knoll, that the reader understands the full implications of their assignment.

The back story, showing the day both agents were recruited by the SING, helps us understand them better. As the book states, they were recruited at their most vulnerable moment, under the premise that they were going to Mars. After some interesting panels showing both agents working with old technology, it becomes quickly apparent that they are not destined for space, but for time. After Agents Rison and Magus accept their SING slap bracelets, it’s back to Dallas on the day JFK dies.

After the events unfold on that fateful day in Dallas, the pair of agents activate their SING and cut through a worm hole. They find themselves in a warehouse in Philadelphia 1943, with a bag of supplies and two sailor uniforms. This is the part of the story that is most intriguing to me. The AI has full control over the agent’s location and assignments, and facilitates supply drops and other support for by using people throughout time. Early on in the story, we see an interaction between Agent Magus and one of these suppliers. Magus tries to get the guy to tell him how he was roped into helping the agents, but to no avail. The SING has strict rules about the sharing of knowledge due to protecting the continuum.

Future Proof is an interesting take on time travel. The SING is reminiscent of the Tardis in that it seems to select just the right time to interject the agents, but as far as I can tell, the stories will remain on Earth. Unlike Dr. Who, the time travelers can only travel backwards in time, so there is a finite amount of time for them to experience and try to correct before they reach the undetermined date of their present. Overall, the story is engaging and intricate. It will be fascinating to see how these two special agents will manage to correct errors in time, while not being the force that causes the deviation. The art is simple and striking. Cormack doesn’t waste ink building complex backgrounds, allowing the characters to command their panels. The layouts are dynamic, creating a lot of visual interest with the use of smaller panels to contrast the larger ones. Future Proof #1 is a thought-provoking tale about the perils of time travel, and has this reader eager for more.