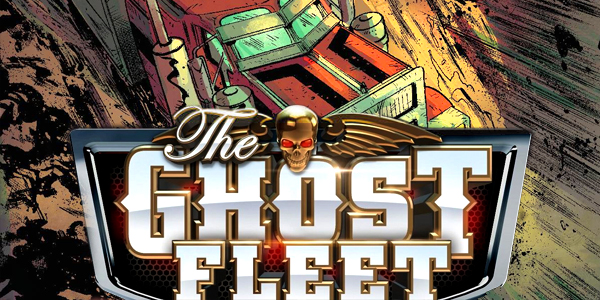 Meet the men you call when you need to move a lot of freight that no one can know about in the new Dark Horse series, The Ghost Fleet #1.

After hearing writer Donny Cates describe his new Dark Horse series Ghost Fleet at NYCC, I was eager to get my hands on the first issue. He’s working with artist Daniel Warren Johnson and colorist Lauren Afee to bring us a tale of covert convoys carrying cryptic cargo.

The issue opens with a history lesson about General Andrew Jackson striking a deal with the pirate Jean Lafitte for aid in exchange for a full pardon for him and his pirate crew. Not only did Lafitte train Jackson’s men in the art of combat, but he also shared how to move freight under the cover of darkness, but this isn’t where the story begins.

Turn the page and wham! we’re riding shotgun in one of the burliest diesel rigs you ever laid eyes on. We meet Trace and Ward, two special agent types who are accompanying the big rig on it’s journey. We can tell from the conversation that the partners have a history, and it sounds like Trace is trying to get himself tested to see if he could be a donor for Ward’s sick wife. Before we’re able to learn too much about that, it comes to their attention that the other escort vehicle is no longer with them. The boys turn to get a look at the vehicle that fell behind, just as a rifle appears from the passenger window. In what looks to be an ambush, the two men are pinned behind the rig in a hail of gunfire. After weighing their options, it’s pretty clear what their next move is, they drive.

Trace shoves the metalhead truck driver over and gets the rig moving at high speeds. The art in the chase sequence is fantastic, showing a lot of suspenseful angles, making the whole thing flow like an action movie. There’s even an awesome shot of a chicken scenario where you see the opponent as a reflection in Trace’s aviators. Words fail at describing how intense and gory these few pages are, as they include the rig smashing through other vehicles, Ward blasting another driver through the door with a shotgun, and eventually, the metalhead driver getting too close to the glass and catching a sniper’s bullet with his brain.

The force of the sniper round causes Trace to lose control, and the truck to come crashing down off an overpass. The two men are knocked unconscious as their trailer is shown ripping apart and emitting a green glow. A team of soldiers swarm the downed truck, but as they near it something terrible happens. We don’t really get an explanation as to what’s going on, but the soldier’s skin starts melting off. On the following page we can see the green glow now growing as a large dome that ends up knocking out the power in the area. We lay eyes on Trace and Ward just as they’re beginning to come to. Trace pulls Ward from the wreck, and the two survey the scene and try to figure out what the hell happened. Curiosity gets the better of Trace, and he beelines towards the tattered trailer, breaking all protocols of never looking. Ward tries to talk him out of it, but Trace is headstrong and beats him to the scene of the accident. We see an odd scene forshadowing the decision that Ward has to make, as well as him eye a pistol in the hands of one of the dead soliders. Again, without getting information on what’s really inside the trailer, we instead get Trace’s reaction. He seems flabberghasted at the site of the wreckage, and states that whatever’s in there is impossible. A feather can be seen, which could allude to some type of creature being contained. Whatever it is, it doesn’t much matter now. The sight makes Trace drop to his knees, which allows Ward the perfect opportunity to execute him. He tells Trace it wasn’t supposed to happen like this. He tells him they were supposed to fix his Sara. But in the end, he fires a round through his partners face, and the scene goes black. Ward calls in a helicopter, and we catch another shot of a feather dancing in the wind, before the panel goes dark again.

Now that we’re through all that business, we’re finally to the point where the story begins. With a swift kick the trunk of the car is opened from the inside, and out spills the bandaged Trace into a desert landscape. After tossing his cookies, we get a look at his sweet new eyepatch. It seems his partner spared his life, and left him in the trunk with some bottles of water, some cash, a pistol, and a plea for absolution. But with nothing left to lose, Trace seems like a man on a mission. We’re left with twelve words split across two pages. The second to last page says this is how our story begins… and as you find yourself on the last page, we see a long haired eyepatched man screaming in front of an inferno that has engulfed the statue of liberty. This is how it will end.

The Ghost Fleet #1 is an exciting adventure that has some mystery and some vengeance all rolled into one. Admittedly, due to my grandparents being tag team truckers, I had a lot of hope for this story. It took a couple reads for me to fully appreciate it, mostly due to me missing what Ward ment at the beginning. It struck me weird that a story about a fleet of trucks that move unseen cargo would start with a failed mission and a vengeful man, but that aside, I’m interested to see where this truck driving Jesse Custer is going to end up. Like I was saying before, the art in this book is really great, especially if you’re into gratuitous violence. Of course the blood doesn’t need to flow from the window of the victim, but it looks SO COOL! I’ll be running out on December 3 to pick up Ghost Fleet #2 and to see how Trace learns to drive with altered depth perception.