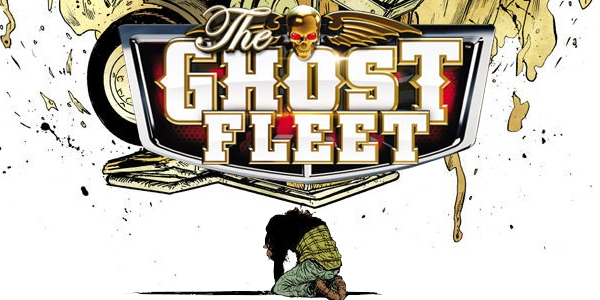 Betrayed by his partner and left for dead, Trace will stop at nothing for vengeance, even if it means going nose to nose with a big rig in the newest issue of The Ghost Fleet.

Dark Horse released the next chapter to The Ghost Fleet earlier in December. The series is written by Donny Cates, drawn by Daniel Warren Johnson, and colored by Lauren Afee. The Ghost Fleet as an organization in the story has a long tradition of moving valuable freight without drawing the attention of the public. In the last issue, we met partners Trace Morales and Robert Ward, two transporters for the fleet. Limited options and bad decisions lead to Trace getting a forbidden look at the cargo right before getting stabbed in the back by his partner. But as the intro says, that was then, and this is now. Trace is back, and there’s ass to be kicked.

The Skinny
A lot has changed in the two years between the first and second issue. Ward is now Director of The Ghost Fleet, his wife is still alive, and apparently he’s now working for the same guys that hijacked the cargo from The Ghost Fleet in the first issue. A very cloak and dagger affair called The Silhouette, but they’re so secretive that Ward doesn’t know who they really are. It would seem he thinks he’s working for a US Senator, and the code he lives by forbids him from asking to know anymore. There’s a lot challenging this mentality, like a whole shipping vessel full of crewmen cut, stabbed, and shot to bits.

Trace is still alive, and he has Ward’s office bugged, so we find him waiting at a diner, listening for Ward to spill the info on the next shipment. Luckily for us, we don’t have to wait long for Trace to spring into action. In the two years since we’ve seen him, he’s built an arsenal which he keeps in his van, tattooed black boxes over his 1812 tattoo on his left knuckles, and most importantly, has developed one hell of a chip on his shoulder, which has him itching for vengeance. Also, spoiler alert, he’s a god damned killing machine.

The Good
Trace is an absolute bad ass that you can’t help but root for. I like how despite being hellbent on revenge, he’s not without empathy or basic human emotion. You see this with the part of the dog in the big rig, but you gotta hope Trace did something good with him before setting the whole 18-wheeler on fire. Also, Trace in a gasmask with a grenade launcher was equally cool. He has a bit of a Winter Soldier appearance but with flannel undertones. The baddies for this series seem equally cryptic. Without showing us too much about The Silhouette, we get the feeling that they are high ranking and far reaching with a very devious plot at hand. It should be interesting to see how these two forces continue to play against each other with The Ghost Fleet caught in the crossfire.

The Not-So Good
Without knowing Cates full plan, I felt the lack of backstory for Trace’s past two years left him feeling a little hollow. Apparently he’s been very busy and has figured out a way to hack a high level agency, and even sneak a listening device under the desk of the director, all while not being identified as one of the organizations star agents. Given the context of the first issue, you would have to assume Trace was well known prior to his MIA. We may get to see how Trace was able to figure all this stuff out as the series progresses, but I couldn’t help but feel it was all a little too convenient at this point.

The Decision
I’m thoroughly enjoying this series so far. Despite some small story issues, the book is exciting and energetic. Johnson and Afee collaborate on some really great looking panels that carry the suspense of the story well. I also really like the action shots mixed in, like the one of the driver stomping on the throttle and bearing down on the lone Trace. It makes for quick pacing that causes me to turn and burn pages as fast as I can. There’s a lot of mystery still left to be revealed, like what the hell is this secret organization acquiring? And just how far will Trace go for retribution? We’ll see if we get some answers when The Ghost Fleet #3 comes out January 7.