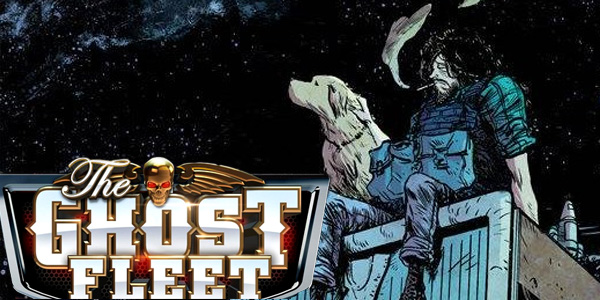 The Ghost Fleet #3 was released by Dark Horse Comics earlier this month. The creative team for this series is comprised of writer Donny Cates, artist Daniel Warren Johnson, and colorist Lauren Afee. We’re currently caught in the middle of a firestorm as the scorned Trace is gunning for the truth at all costs.

The Skinny
The Ghost Fleet #3 gives us a front row seat to Trace’s expert dismantling of the current escort team. He’s decked to the nines with a bow & arrow, fentanyl laced knockout gas, and an earth shattering grenade launcher. Afterwards, we see the collateral damage and mending attempts of Director Ward, who is under heat from Senator Cohle. Cohle is the owner of the shipment, and also happens to be part of a secret society. It should be no surprise that he is not pleased about the shipment that has gone missing.

The Good
The art in this series has been fantastic to watch. Johnson and Afee paint the hell out of Trace’s onslaught, culminating in the quintessential “blow something up and walk away like a bad ass” shot that ends up being a full page spread. Johnson is translating Cates’ scripts into a very well paced and suspense building narrative, especially with whatever the hell is in the truck. What’s in the truck!?

The Not-So Good
My complaints about this story are more about the character of Director Ward. He acted much more macho when he was riding with Trace in the first issue, but has been a veritable whiney wuss the rest of the series. How could someone so snively, ascend to the top rank of such an illustrious organization? If the story warrants it, I’d like to see some more background on Ward and how he earned respect and his promotion. The coolest thing he does is call in some psychotic ex-agent to mop up his mess, but does he always need people to do his dirty work?

The Decision
This series has been excellent thus far. Admittedly, I have a soft spot for the rumble of a big diesel engine, so it would take an atrocity to make me lose interest in this story. The creative team makes it very easy to want to follow, creating encompassing imagery chock full of violence and intrigue. Maybe one of the most interesting things happens right at the end. Has Trace gone the way of Rick Grimes and started talking to invisible lovers? Maybe we’ll find out when The Ghost Fleet #4 is out February 4th.