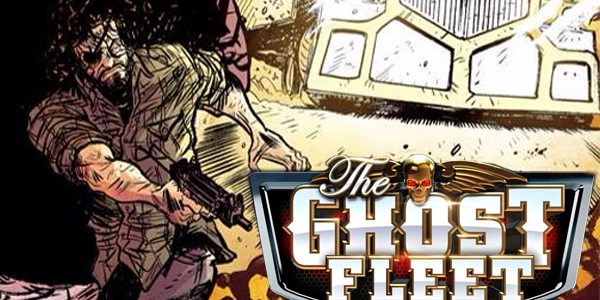 A ghost on the radio, a killer on the horizon, and a big ass shiny truck.

Dark Horse released The Ghost Fleet #4 last week, which is their ongoing big rig adventure tale. The story is written by Donny Cates, illustrated by Daniel Warren Johnson, and colored Lauren Afee. When we last left the fleet, Trace, the scorned ex best friend of Director Ward had stolen one of the trucks. Having tried talking, and with no other options, Ward’s forced to call in the big guns.

The Skinny
This issue starts off with a flashback, to remind us how tight Trace, Ward, and Ward’s wife Sara used to be. Last issue, Ward tried telling Trace that she died, but he was cut off too soon. Thinking he heard her voice coming from the CB radio, Trace reaches out looking to reconnect with a lost friend. What he finds is out of this world, and it leaves him dazed, confused, and possibly stranded. We also meet the feared Micky Reno, who is a heartless killing machine that wears his emotions on his chest…literally.

The Good
There is so much good going on with this story, that I don’t know where to begin. Micky Reno is going to be one hell of a foil to Trace. I’m not really sure what the deal is with his shirt. It doesn’t appear as if anyone in the story can see it, but we’ve only just met him. Trace’s vengeance is even more complex than I had originally thought. I think there’s a part of him that still cares for Ward, which makes the whole thing that much more complicated. The art continues to be immersive and fun, with an array of panel position and focus. I can’t forget to mention the full page of Trace and Sara head tripping that is straight up badass and contrasts with what happens on the facing page really well.

The Not So Good
Despite how cool the art is, this issue is a backstory book. The first chunk fills us in on the past, the last chunk fills us in on the future and the middle just messes with our heads. The story was moving at a pretty good clip, and this issue rode the brakes a bit. Not saying what we learned isn’t important, but we jumped from a trunk to a rampage in an issue while this one we barely left a parking lot.

The Decision
I want to go wherever this story is heading. The art is killer and the story is twisted and vindictive. In the first issue, they teased the paranormal, but given this issue, it’s clear Trace is dealing with some pretty heavy stuff. Ward is still a wuss, but I’m excited to see Micky and Trace go head to head. I’ll be back for more when The Ghost Fleet #5 hits the road on March 4th.