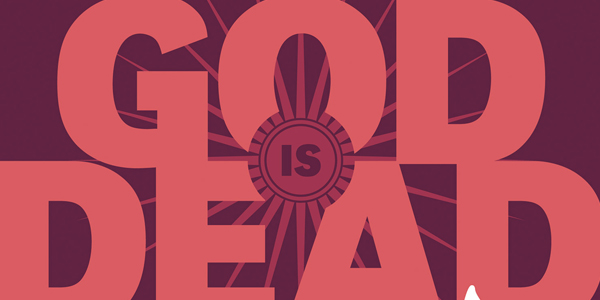 Welcome to a world shaken by the existence of Gods, and turned back to the primitive days of human sacrifice.

Released in August 2013 by Avatar Press, God is Dead #1 offers a very interesting view into what would happen if the world returned to the polytheistic days of the past. The book is written by Jonathan Hickman and Mike Costa with art by Di Amorim. There are a few variant covers in circulation, but I preferred the version designed by Hickman, featuring a simple lotus flower illustration balanced with the title type prominently displayed.

Once you crack open the cover, you’ll find that this issue is a 26 page introduction to a bizarre world, as well as a little bit on every character in the cast. The story takes place on Earth in the present, but not as we know it. The first panel depicts a volcano chucking fireballs at the people of Greece. The following pages illustrate other violent acts of nature happening within days of the eruption. Some writers struggle with killing people in their stories, Hickman & Costa kill 7,049,000 by the end of the second page.

From there, we begin meeting everybody in our cast. There are a lot of players in this story, but it’s easy to categorize them into to three groups– The Collective, the remaining scraps of the US Army, and of course, the Gods.

The Collective is five person team of miscreants, living in a sewer in the DC area. They’re comprised of “The genius” Dr. Sebastian Reed, Airic “I feverishly remove and replace my glasses between panels” Johsson, Thomas Mims (who bears a striking resemblance to either Einstein or Twain), and Dr. Henry Rhodes (who reminds me of Wheels from the old Burger King Kids Club except he has to talk with a keyboard). Oh, and of course there’s the tube-top sporting chick named Gabby who likes to make people bleed with the help of her dual revolvers.

Then there’s the US Army, or what’s left of them. They’re hunkered down in a mountain base somewhere in Pennsylvania. They were run by the President, until he decided to give himself a haircut with a handgun. Following that alarming panel, we learn that they’re going full military coup, and operating under their own command. We don’t learn much about these guys, other than they’re currently trying to show everyone “why even God should fear the United States Military”.

Finally, there’s the real reason I picked up this book in the first place. Team Gods is comprised of fifteen of the world’s most revered deities, spanning five early civilizations. By the book’s closing, we see the Norse Gods Odin, Loki & Thor gather some of the Egyptian, Mayan, Hindu and Ancient Greek Gods within the halls of Valhalla. Their plan equates the world to a “ripe and wet” woman ready to be taken by the Gods. I like how Amorim depicts the Gods parading into Valhalla, and thought it was a clever way to introduce them.

The book has a couple weird spots here and there, but works as an introduction to the greater story. Given the size of the cast, I can understand why Hickman & Costa would take the time to familiarize the reader with all the moving parts. I thought they made an introduction issue more interesting with the use of clever panel transitions. The spread showing the news anchor is a great example of this. It depicts the destabilization of educated thought paired with mankind’s predisposition for mass hysteria in an 8 panel transformation of an opinionated news anchor devolving into a Mayan priest.

However, some of the dialogue is off-putting. Odin talking like a common hoodrat ejected me out of the story. I’m not saying the text needs to be written in a fancy serifed font like Marvel’s Thor books, I would just hope that the All-Father would practice a bit more eloquence with his word choice. All that being said, God is Dead #1 offers thought-provoking insight into a world shaken by the existence of Gods and turned back to the primitive days of human sacrifice.