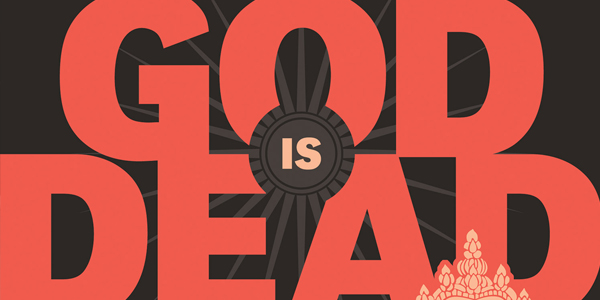 God is Dead #2, the story of the return of Gods and the chaos that results among men.

It was a slower week for my pull list, so I decided to go back once more into the God is Dead series released by Avatar Press. God is Dead #2 (published in September 2013) is written by Jonathan Hickman and Mike Costa with art by Di Amorim. It is the story of the return of Gods and the chaos that results among men.

The remaining scraps of the US Military are off the grid, so to say, and are operating under their own command. The issue opens with a battle between the Military and the Quetzalcoatl supporters (even though the art shows Huitzilopochtli). The military is clearly outmatched, so they resort to shooting a big ol’ missile that’s fixing to wipe out most of Austin, TX. After the beautiful mushroom cloud, which Amorim illustrates, clears away, we see Huitzilopochtli (even though the story says Quetzalcoatl) without a scratch on him. This event convinces some of the General’s top men to reconsider their take on theology, and we leave the General about to be sacrificed to the Gods he just nuked.

Within the halls of Valhalla, we see more interaction between the Gods, and get a better understanding of what their priorities are. It would appear that Earth is fairly evenly split up amongst the Gods and that as long as everyone maintains their borders, everything is cool (can you feel the foreshadowing?). This is followed by The Flame, the news cast as in the first issue. I think it’s a clever way for Hickman & Costa to catch the readers up on the mass restructuring of the world. It’s clear the Gods have divvied up the board and are ready to start playing Risk for real.

The story checks back in with The Collective, a team of intellectuals committed to solving the Gods existence and returning the world back to the way it was. Amongst two pages of bickering and banter, they ultimately decide that they can’t do anything until they know more about the Gods. And the only way to know more is to capture one and study it. I hate to be picky, but this issue’s victim of poor costume consistency is Dr. Reed, who can’t decide whether he likes his glasses on or off.

Finally, we get to what I’ve been waiting for. All that foreshadowing pays off when Odin, Thor and Loki intrude on a praise fest for Vishnu, Shiva and Brahma. The three Hindu gods summon their giant champion Trimurti, which proves to be no match for the might of Mjölnir. Amorim draws four awesomely gruesome pages of God fights that eventually end in a whole page skewering by Odin.

Consistency issues aside, this story is an entertaining look at a who would win in a fight amongst gods. The story is gory and aggressive and the characters are fascinating. I’m looking forward to picking up God is Dead #3.