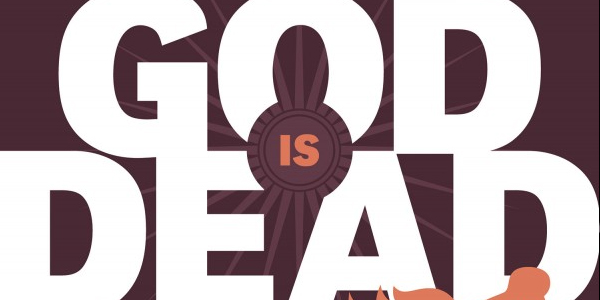 The Gods war over scraps of land while the bodies of men lay at their feet.

In an attempt to catch myself up on this intriguing series, I made time to read God Is Dead #3 over the weekend. The story is written by Jonathan Hickman and Mike Costa with art by Di Amorim. The publisher is Avatar Press, and it was released in October 2013. The reason I’m so eager to catch up is that coming out this week is God Is Dead: Book of Alpha which has stories from writers like Mike Costa, Simon Spurrier, and the infamous Alan Moore. Before I can get there, I need to read everything from the first series, so here we go.

God Is Dead #3 begins with a look at an armada of warships sailing under the protection of the Mayan gods Quetzalcoatl, Tezcatlipoca and Huitzilopochtli. On the second page we see full spread illustration of the warships bearing down on three floating pyramids. With a wave of a magic stick, Tezcatlipoca makes one of the pyramids erupt in a fiery explosion, but as the clouds clear we see the floating Egyptian god Horus, standing strong and unscathed.

From here we jump to one of only sixteen private aircraft currently aloft, and have a look in on the resistance team called The Collective. Despite a little too much coincidence on how they’re able to get the plane, the team go on to dispute whether or not the gods are of flesh and bone or some other material all together. They also question why it has only been these five factions of Gods, and not some other religions, like Chinese for example. Then out of nowhere comes this big ass, double-headed dragon spitting pyres, and we’re left to assume the plane is forced to crash.

We jump back to team Maya versus team Egypt, with Horus being joined by Bast and Anubis. It’s clear now that due to the Norse gods attacking the Hindu gods in God is Dead #2, the floodgates of conquest have been burst wide open. In the distraction, the Mayans seize an opportunity to claim some additional space, without expecting the resistance the Egyptians would bring. These war panels had to be some of the best so far in this series. Amorim illustrates a ridiculous wave of vicious cats that engulfs the Mayan army, clawing out their souls in a swarm of teeth and talons. In the last panel of this series of struggle shows Anubis ripping Huitzilopochtli’s throat out.

We jump back to The Collective who have managed to survive the crash by parachuting out to safety. Once everyone’s accounted for, they begin making their way towards their target. Thankfully Gabby’s dad, the pilot, is so good at his job, that he’s managed to crash land their plane right next to the body of Vishnu, one of the murdered gods from God Is Dead #2. The team waste no time cutting apart the god and taking samples, but this is no autopsy. Gabby lets us in on the secret, they are engineers, and they plan on building their own god for protection.

God Is Dead #3 is visually excellent. The panels featuring the gods fighting are fantastically violent and are what keep me coming back to this series. The story line still feels contrived at times, especially when watching The Collective. Despite any hiccups in the story, I am still very interested in seeing how the god wars pan out, and who will reign supreme. Also, judging by that scary ass dragon, who knows what other deities we’ll get to see enter the ring.