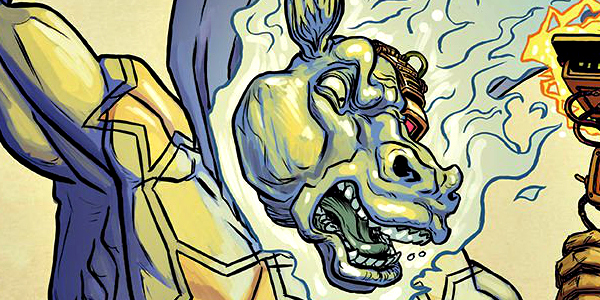 Ryan Browne’s brain churns out a second wonderfully satirical helping of superhero insanity akin to nothing else on store shelves.

God Hates Astronauts is the most ridiculously insane comic series being printed today.

And I couldn’t be happier about that.

God Hates Astronauts, the brainchild of writer/artist Ryan Browne, is about a cosmic-powered superhero named Star Fighter, the leader of a NASA –sponsored super group named the Power Persons Five, tasked to stop astronaut farmers from launching their own homemade rockets into space. During a dangerous mission to thwart world domination by a legion of fighting bears Star Fighter gets his head pummeled into a disgustingly swollen mound by an evil version of legendary prizefighter John L. Sullivan. When Star Fighter’s wife, Starrior, cheats on him with a deformed cowboy named Texas Tom – a cowboy haunted by the spirit of a lovesick cow named Blue Grass – Star Fighter goes on the offensive only to get shot in the head by Texas Tom. Star Fighter’s swollen head bursts and leaks nasty, nasty things all over the place. Star Fighter decides to cut off the remnants of his head and fuse with Blue Grass, becoming the supernaturally cosmic-powered Star Grass.

I’ll give you a minute to digest that.

Digested it? Good. Because it legitimately gets more insane and ridiculous from there. But that’s what God Hates Astronauts is all about: it is a barometer for how ridiculously insane a comic book can be while still having a great plot and not taking itself too seriously. In many respects it’s what comics are all about – no boundaries. Image Comics released a trade paperback compiling the series thus far (it was originally a webcomic) in October 2013 while greenlighting an ongoing series that continues the story that Browne started online. The first five issues of the monthly series have been culled into a new trade paperback volume and man does it continue that story in the craziest ways possible.

God Hates Astronauts Volume 2: A Star Is Born is absolutely bonkers in the best way possible (is that a thing?). Volume 2 takes place two years after the events of the webcomic and starts us off with Star Grass and a revamped Power Persons Five team backed by an armada of star bears (did I forget to mention the star bears? So sorry!) thwarting a rocket launch attempt by a group of astronaut farmers planning to launch into space to take their rightful places on “golden moon-heaven”. What is “golden moon-heaven”, you ask? It’s a place where a man is free to love a chicken of course!

Like I said in the first sentence of this review: this series is ridiculously insane.

Ryan Browne has found a way to take a smattering of ideas and concepts that are weird on their own and make this mass of quirk that somehow works effortlessly. Everything in the five issues that are contained in this volume works when it should probably do the complete opposite. If anything God Hates Astronauts is akin to Evan Dorkin’s Milk and Cheese and Rob Schrab’s Scud: The Disposable Assassin in that it plays in its own sandbox – one that has very few rules and regulations standing in its way. If Browne is holding anything back while he concocts the God Hates Astronauts universe you sure as hell can’t tell. It is a testament to the kind of writer that he is, although I must say that his brain seems to be a very scary place!

Browne’s art is the perfect complement to his story. You get a feeling that all of the characters within the pages of this tome are exactly as Browne pictured them in his mind. His style harkens back to comics from the late-70’s to mid-80’s in look and tone while being contemporary in its own way. It’s colorful yet dirty and twisted. It’s traditional yet out-of-the-box. In other words Browne’s art is a contradiction that fires on all cylinders. If Browne decided to stop drawing God Hates Astronauts and focus on just the writing end of things this book would just not feel the same. The symbiotic relationship between his written vision and artistic depictions are truly what makes God Hates Astronauts so darn good.

God Hates Astronauts is the most unique satire on superheroes I’ve seen in at least a decade. If you want to take a chance on reading something that is like nothing else on any comic shop shelf anywhere in the world then this is your book. Even if this isn’t your usual cup of tea you owe it to yourself as a comics fan to give God Hates Astronauts a chance. Volume 2 serves as a great jumping-on point for this insane world and its inhabitants, although I recommend picking up Volume 1 as well so you can have the complete story and truly get immersed in the most imaginatively twisted comic book universe going today.