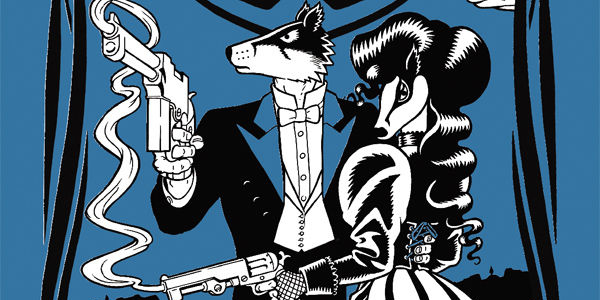 One of the most entertaining and visually striking graphic novels of late 2012 came from British writer/illustrator Bryan Talbot. Grandville Bete Noire is a detective story featuring an anthropomorphic badger and his monocled rat partner in an alternate history France. Complete with well-paced action, plenty of mystery and a great sense of humor, I can’t recommend this book enough.

Like the previous two books in Talbot’s Grandville series, Bete Noire begins with a cold opening that throws the reader right into the middle of the story. A giant frog named Baron Krapaud – clearly a riff on the classic Bond villain stereotype, as he pets the smaller frog sitting in his lap – is holding a meeting in his secret lair to discuss the overthrow of the French government. When a human scientist (or “doughface” as they’re called in this strange alternate reality) stands up to Krapaud, the true power of his automaton army is shown off to frightening effect. 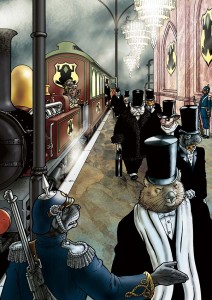 Enter Detective Inspector of Scotland Yard Archie LeBrock and Detective Roderick Ratzi, who are tasked with investigating the baffling murder of a well-known Parisian artist. The story takes these two anthropomorphic creatures through both the wealthy and the seedy parts of the Parisian art society and everywhere in between, making all kinds of humorous and dangerous interactions along the way. Talbot’s writing is uniformly excellent, with sharp dialogue that’s full of awesome Britishisms (“I say!”, “By Jove!”, “Jolly good!”, etc.) and a plot that has a few great twists. There’s even a love story thrown in for good measure, and it works well.

As Talbot explains in the afterword, he was inspired by the illustrations of early nineteenth-century French artist Jean Ignace Isadore Gerard (pseudonym J.J. Grandville) that depicted “clothed animals behaving like people” and satirized French society. Talbot does some satirizing of his own, and even draws from some incredibly interesting history regarding the CIA and its covert funding of the abstract art movement during the Cold War. 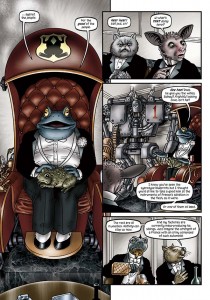 Talbot’s art is equally as captivating as his writing. He builds a beautifully detailed rendition of a steampunk-infused Paris, and his animal/human hybrids look as believable as they possibly can. The action scenes play out like a well-directed film (especially the spectacular finale). Much like Juanjo Guarnido, who draws the excellent Blacksad, Talbot manages to capture you with his art and distract you from the odd fact that the main characters are animals who walk, talk, and act like humans.

Published by Dark Horse, the Grandville Bete Noire is available now as a hardcover for $19.99 and in Dark Horse’s digital comics app for $9.99.