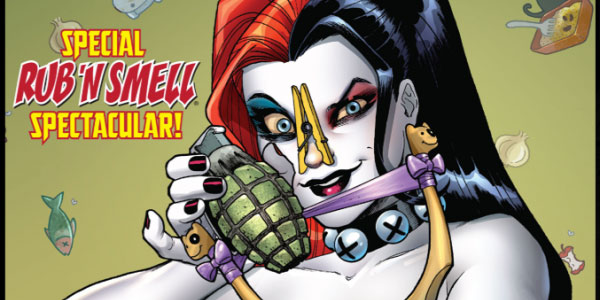 Only a book like Harley Quinn could pull off a “rub and smell” issue.

Yup.  That’s right.  I bought this book.  And, yes…I opened it (it was polybagged).  And, no…I didn’t buy an extra issue of it.  The thought did cross my mind, however.  But, the days of your friendly neighborhood jman buying duplicate copies of a comic book are long since gone.

How I feel about this particular issue is pretty much how I feel about the book in general.  I want to like it in the worst way.  I’m a big fan of Harley Quinn, Amanda Conner and artist Chad Hardin, but…the book overall just leaves me feeling flat.  Unfortunately, so does this oversized, “rub and smell” annual.

Much like Grant Morrison’s Multiversity, I’m finding Harley Quinn too self-referential anymore.  There’s too many insider jokes and it tries too hard to be irreverent at times.  I get the whole “knocking down the 4th wall” thing.  I appreciate it, and it’s funny/entertaining in small doses.  But, it’s just like any other writing trope, too much is too much.  Deadpool seems to suffer from it too, anymore.  But, that’s a topic for another discussion. 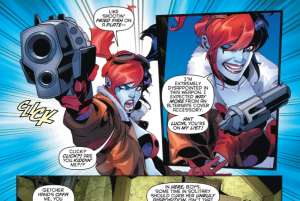 too many insider jokes!

As for the story itself (and without being too spoilerific), Poison Ivy finds herself a prisoner at Arkham Asylum and Harley goes to bust her out, as only Harley Quinn can.  Hi-jinks ensue (what did you expect?!?!), which include a few clever hallucinatory sequences.  Much of the focus of the story is on Harley and Ivy’s relationship, however you want to define that.  Ivy’s showed up a few times in past issues of the series and there’s a nice dynamic between the two of them. 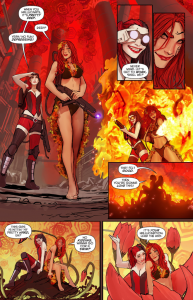 The whole “Rub and Smell” thing is clever enough.  Yea…it’s a gimmick.  Of course it is.  For a one and done, it was fun and surprisingly not overly abused.

John Timms works the pencils for the real-world sequences in the annual.  And guest artists Ben Caldwell, Kelley Jones, Joe Quinones, and one of my favorites lately…Stjepan Sejic, pencil the hallucinatory sequences.