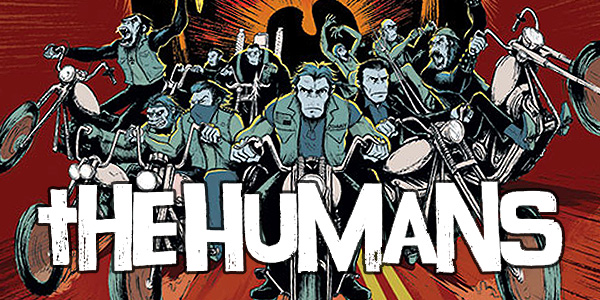 The Humans is a bad-ass biker gang crime story in the vein of Sons of Anarchy, but with way more bananas.

A couple weeks ago I was at my local comic shop, picking up the stuff on my list when I was suggested a very strange book by a buddy of mine. I wasn’t sold on the premise until I was shown an illustration on a biker ape bumping a line off a hooker monkey’s back, and decided quickly there after to purchase a copy. The book is called The Humans #1 and it was released by Image Comics at the beginning of November. The story is written by Keenan Marshall Keller, drawn by Tom Neely and colored by Kristina Collantes. It follows a gang of drugged up biker apes, stationed near Bakersfield, California in the early 1970’s.

We open with a sprawling landscape followed by a reflection of said landscape in a pair of badass aviators. These are being worn by Bobby, the leader of the biker gang The Humans. He’s currently riding point in a funeral procession while we’re given a little overview of what The Humans are. Misfits, losers, and punks, all banded together under one patch to stand as brothers against the world. This all leads up to a fantastic two-page cover title page spread that shows the name of the gang (and book), their insignia, their location and a whole bunch of illustrations to warn you about what you are getting into. Not into drugged up apes that fight, pee in public and cause disturbances for the police? Then I would suggest you stop reading immediately, and question why the hell you would buy a book like this to begin with. For the rest of you miscreants who are as messed up as I am, let’s get back to the ape madness.

The crew are mourning the loss of the brother in arms, Mojo, whom the procession was for. One of the more creative members named Marra is asked to read a poem, in honor of the deceased. What follows is a simple yet truthful few words on life, and a reminder to value the little things like the joy in your joint or the ice in your scotch. They lay his vest on top of his casket, and follow with flowers. All very touching and oddly human. Welp, this ends on the next page when they decide to say goodbye to their friend the Humans way. A storm of pills and joints rain down on the crew, and the party begins. They trade stories of their fallen friend, air their monkey jibbly bits, and receive mouth hugs behind an oak tree, but all this comes to an abrupt end when they get some unexpected visitors.

Out of the trees comes the rumble of the rival Skabbs gang. They encircle the Humans on their motorcycles and taunt them before the two leaders are able to meet face to face. Apparently the Humans rode through the Skabb’s territory on their way to the cemetery. The two trade verbal jabs all leading up to a full on monkey street brawl. Thirteen panels fill the following spread, and provide a montage of various monkey violence, mostly showing the Humans kicking the snot out of the Skabbs. It ends with the leader of the Skabbs being bloodied by Bobby’s hand, causing him and his crew to retreat. Counting it as more good news the Humans head back to their compound, to party some more.

At the party, during the Smelly Tongues set, we see the Humans leader Bobby, being approached by another member who says something about a character named John. Bobby seems litttle interested in talking about it, and instead concentrates on the bonfire. Atop the bonfire is Mojo’s bike, and Bobby give the order to Karns, one of the rougher Humans, to fire. I really liked the KA-FUDGIN-BOOM that happens on the next page, and how the typography works to ignite the illustration. I also liked on the following two page spread, where we can see Mojo’s ghost riding out from the flames while Smelly Tongues sends us out on the chorus. On the last page, we see a gorilla walking the lonesome road towards the Humans compound. They suggest he’s the living dead, and the teaser cover would suggest we’re looking at Johnny “back from the dead”

The Humans is a very fun and violent book filled with crude humor and monkey dongs. The writing is simple and straightforward. The art is fairly detailed and carries a psychedelic feel to some of the pages, which is fitting for a story set in 1970. There are plenty of books with very serious stories on the shelves, so I welcome one that doesn’t take itself too seriously, and just wants to show you some gorillas getting their swerve on. Next issue is out December 3rd, and my guess is there’ll be some partying in it.