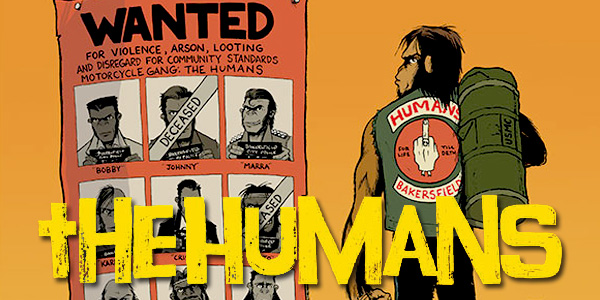 He’s not a soldier, or a chimp, or an American. He’s a low-life, misfit, loser, and he’s back from the dead.

Released at the beginning of December, The Humans #2 is back with another ape nuts issue about a bad ass biker gang full of monkeys. The story is written by Keenan Marshall Keller, drawn by Tom Neely and colored by Kristina Collantes. The first issue saw the funeral for a friend, as well as some riffing with a rival gang. The second issue picks up the night of the funeral, and finds another one of their biker brothers finally return home.

The Skinny
While the rest of his biker brothers continued doing what they do best, Johnny was over in Vietnam fighting as a soldier in the US military. No one had heard from Johnny in quite some time, and everyone assumed the worst, including his older brother, and Humans leader, Bobby. But lo and behold, there he is, standing at their front door. We get to watch as this crew says goodbye to one of their own, while welcoming another back.

The Good
The Humans story has an interesting concept, taking a typical biker story and changing out chimps for humans. Unlike the gang from Sons of Anarchy, it seems The Humans have not earned the same respect from their community, and we get to meet more potential antagonists in police uniforms. This could provide some very interesting fodder, once the gang finish partying and get back to business. The art is excellent so far, with Neely and Collantes not being afraid of the full spread. Two more, like the first issue, break up the story very well and offers visual variety. I also really like the attention to detail, and the immersive world they’ve built. You can see the evidence with Conga Cola and Dunston’s [Checks] Inn. Lastly I really liked the boot stomp flashback scene, and given the teaser info on the next issue, I look forward to seeing how these types of scenes will continue to work.

The Not-So Good
My main gripe with this issue is that it’s character focused and a little slow. It makes sense that we need to know who the players are before anything big happens, but this issue spends a lot of time seeing Johnny’s return with each member, as well as two spreads of him hanging with the band and addressing the crowd. Now that we know the pieces, I’m hoping for more monkey brawls and bike rides in the upcoming issues.

The Decision
Despite this being a slower, character focused issue, the premise behind The Humans is too good to me to miss. The art continues to be the best thing about this series, with page after page of glorious biker monkey madness. It seems like the road back from war is a long one, as the flashbacks will continue to affect Johnny when The Humans #3 is released January 7th.