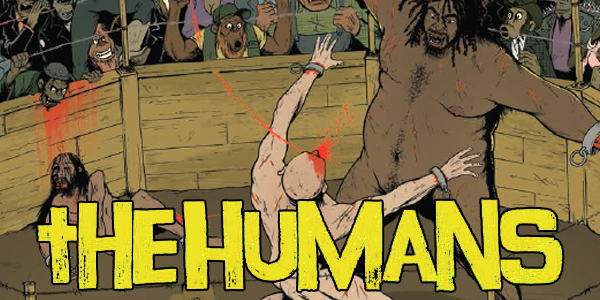 The Humans head to the skin fights where both their skin and their reputation is on the line.

Image Comics released the next installment to The Humans series in the beginning of February. The Humans #4 is written by Keenan Marshall Keller, drawn by Tom Neely, and colored by Kristina Collantes. With the stage set, and the fighters ready, it’s time for The Humans to go bare knuckle brawling!

The Skinny
The Humans make it to the skin fights, taking with them their top sapiens. They’ll go head to head against the best from the other clubs for the sheer enjoyment of all. Some big talk and chest puffing gets The Humans a top match up with a lot at stake. Will Johnny’s eye for a killer mixed with some performance enhancing drugs give them the upper hand?

The Good
Holy crap was this a fun issue! Despite the arena theme being a bit cliche, it’s still great seeing apes betting over human combatants. We get to meet more of the other gangs in the area, and learn a little about each one. Also, we hear Johnny’s sweetheart is in need of some help. But my favorite panel thus far in the entire series has to be the jaw bone king. It was such an absurd sight I laughed out loud. For realsies.

The Not So Good
I imagine it’s hard to do an original motorcycle club story these days, in the wake of Sons of Anarchy’s popularity. The story is cliched at times, especially in terms of the clubs and the cause. Also, during the fight, I never doubted the little skin. That altercation could have been a bit more suspense building, leading up to the jawbreaker. However, this story still has an interesting concept, being that they’re all apes. I just hope it stays novel and doesn’t fade to shtick.

The Decision
The Humans #4 renewed my faith in this series. Despite the familiarness of the story, the overall tone of the tale is rugged and entertaining. I have to believe the orangutan overseer isn’t going to be happy to learn about the PEDs or The Humans getting out of his game. For now, they just better make sure the goods are protected when The Humans #5 hits the shelves.