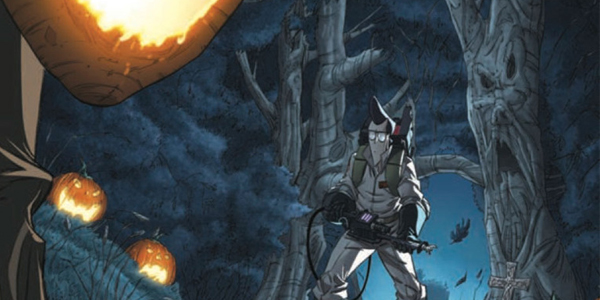 Can Rodimus find the legendary Knights of Cybertron while the Autobots pursue the scientist Jhiaxus and Shockwave enacts his plan eons in the making? And after their extra-dimensional adventures can the Ghostbusters get back into the groove and survive the busiest season of the year? 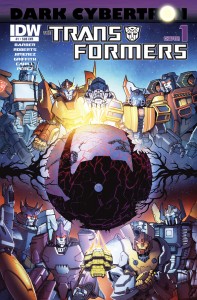 5 million years ago Jhiaxus came upon an anomaly in space, not knowing what it is he ventured into the it to spread the Cybertron way. Before entering a last message was sent from Jhiaxus to his most valued student. Flash forward to present day, Shockwave is remembering that message continuing the work his mentor left for him. After using the resurrection crystals to bring back Waspinator & Titan, and Jhiaxus from whatever universe he was stuck in Dreadwing pleads with Shockwave to stop before something happens.

Meanwhile on Cybertron Starscream becomes comfortable in his new body and role as leader of Cybertron He notices that the sun hasn’t move from its previous spot since he left, so he preforms a scan and realizes something is wrong. Rodimus meets up with another group of Autobots preparing to head out to the dead universe to find Jhiaxus and are met by BumbleBee and the Dinobots who are already there. They discover what Jhiaxus been doing out there. After raising Lord Nova from the past Shockwave and his crew prepare to advance on Cybertron and begin their golden age of Cybertron.

Great beginning to a new twist on the war, its no longer Autobots Vs Decepticons, but a battle of all of them against Lord Nova Shockwave and his crew. 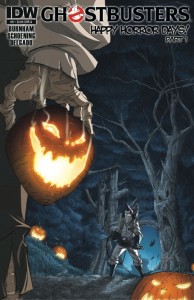 Venkman and the female rookie argue back and forth while fighting a ghost horse and are unknowingly being followed by Stingy Jack. Realizing he found his way out purgatory without ending up in heaven or hell, Stingy Jack begins to plan for the Ghostbusters to capture him.Meanwhile Peck, realizing the Ghostbusters are working hard with devils night approaching quickly, calls for help. The guys get a call from the fire department about a fire they cannot put out.  Running out to investigate they find a way to beat the fire with some well place slime, allowing them to go in and investigate the interior. Stingy Jack hiding in waiting for them to show up sees an opening and jumps on Winston’s back, opens a trap, and gets himself sucked into a trap. Baffled by this they notice a lighted turnip being snatched up off the ground by a giant hand, and they  realize the captured Stingy Jack.

Great beginning to a ongoing story line. Can Stingy Jack remain Captured? What part will he play in the ongoing story? With Devils night approaching paranormal activity will pick up making the Ghostbusters life hectic for the next few days. Looking forward to the next book