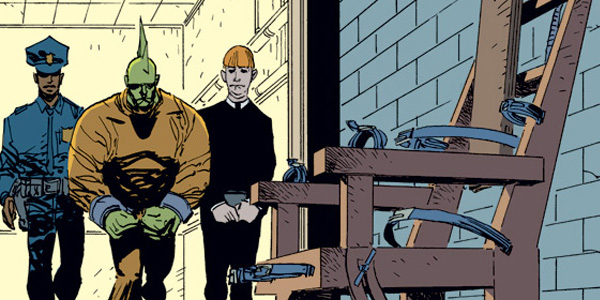 With control of the Vicious Circle being fought for and Dragons race on the verge of extinction can his son Malcolm step out of his fathers shadow and prove to the world he can be their hero in Savage Dragon #192?

Firepower and Dart battle for control of Vicious Circle. Firepower believing he has the upper hand by disarming Dart of her sword only to be caught off guard with exploding darts into the eyes. After defeating Firepower Dart gathers up the rest of the circle and announces to them she is in charge and the next phase of her plan will move forward expecting their full cooperation. 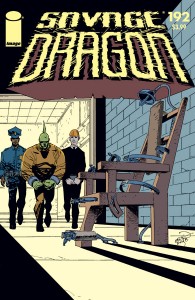 Meanwhile on his way to death row or so the good reverend thinks, he tries to talk Dragon into escaping. Dragon well aware that the prison he is in is meant for guys like him, continues towards what is thought to be the electric chair. Dragon has himself electrocuted to return him to a normal Krylon so he can be moved to a different prison while he goes through the appeals process. Why the secrecy? Lorella and Dragon are the last of their race and in order to prevent extinction they must try to continue the race and having super powered Krylons like Savage Dragon would kill the mother. After being moved to his new prison Dragon is confronted by some prison thugs trying to take advantage of his lack of powers. Dragon defeats them easily reminding them even though hes not super anymore he still hasn’t lost his ability to fight.

The crime fighting days of Savage Dragon are being left to his son Malcolm to handle. No sooner does he leave his dad, Slag a.k.a. Brenda Funk comes to take revenge for the loss of her boyfriend Adrian who lost his life when an alien ripped him in half. Trying to convince her he was not responsible Malcolm’s step sister Angel steps in, which sparks an argument between them. Malcolm believes violence is not always needed to solve problems, but Angel believes she just saved his life. Now being forced into the public eye Malcolm vows to support the city of Chicago and not leave like the rest of the heroes have.

With Savage Dragon giving up his powers, his son has big shoes to fill. Great start to a possible new era created by Erik Larson.