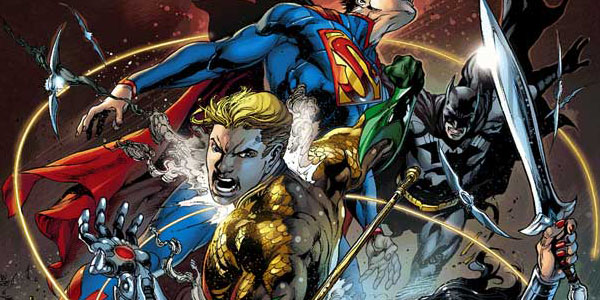 The army of Atlantis is leaving the safety of the ocean and attacking the surface world. Can the Justice League  stop them, and what role does Aquaman play in the attacks?The book may be titled the Throne of Atlantis, but there are plenty of other parts to the story. This graphic novel reprints Justice League #13-17 and Aquaman #15-16. The combination of the two books gives fans to read the story as whole without having to track down the individuals issues. 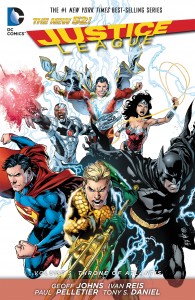 The book starts off with the Justice League chasing down the Cheetah. It shows the current hierarchy within the team and the tension between Batman and Aquaman. Both feel they should be leading the team, outsiders in this super world think their experiences can guide the team. The first part of the story though with Cheetah, explores the history of the character and how the New 52 Cheetah is a combination of the original. Following the encounter Superman and Wonder Woman have a date night, but not as the Super couple. Superman shows her that even the strongest need down time, and helps her find a secret identity.

Their night on the town is cute short when an entire ocean is dumped on the city, and they rush to help those drowning. The people of Atlantis are attacking the surface world, because of torpedoes from the navy impacting near their kingdom. The team is spilt between Gotham and Metropolis with Superman taking care of his home town with Wonder Woman, and Batman taking care of his home with Aquaman. Many die in the first onslaught, and Aquaman realizes the attacks are part of his own war plans he developed with his brother Orm to safeguard Atlantis.

No one is able to figure out how the battles were started and the audience is introduced to the Secret Society. Groups of villains working behind the scenes to keep the Justice League and other heroes busy, while a master plan is being implemented. Aquaman, though exiled from the kingdom of Atlantis reclaims the throne from his brother, known to the surface as Ocean Master, and stops the war. The story ends with a meeting between the Green Arrow and Steve Trevor. Though Trevor is hurt and off active duty, he sends Arrow on a mission to infiltrate the society, and find out who is pulling the strings.

This book provides a good jumping on point for people who have not been keeping up with the New 52. It is a combination of individual character development and team building giving new fans a good survey of this newer DC universe. It’s also a starting point for this years big crossover, Forever Evil giving some background on the early building of the Society.