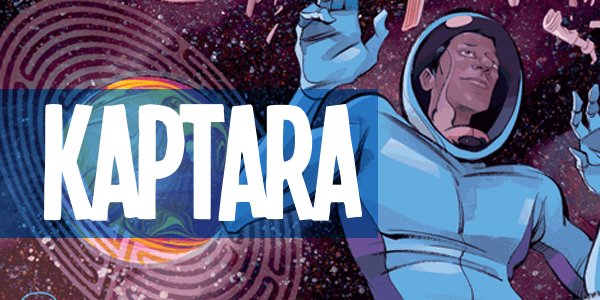 Can we all agree there’s never anything good at the other side of a wormhole?

Image Comics released a new series from the minds of writer, Chip Zdarsky and artist, Kagan McLeod at the end of April called Kaptara. Together with colorist Becka Kinzie, the team take us on a voyage through space that is equal parts exciting and goofy and definitely worth a read.

The Skinny
The story starts out like a cheesy Star Trek rip off, and we find a spaceship heading towards an anomaly in space. Of course, being an exploratory ship and all, the crew pilot the ship closer, but wind up getting pulled into a wormhole. The path proves to be too treacherous for the ship, so the crew must eject and hope their escape pods can take them to safety on a nearby planet. Keith, our POV character, survives the crash landing, but is separated from his crew. He soon finds himself in the company of an alien race with the looming threat of Earth’s destruction, but in the end, why should he bother saving it?

The Good
When I first grabbed Kaptara, I assumed I was in for a slightly modified version of a story I’ve heard before. Once I started reading though, I was delighted to see this type of story unfold through the eyes of a character I’m not familiar with at all. We see the perspective of an introverted, homosexual man who is displeased with the bigoted world he belongs to. Zdarsky’s wit and sense of humor soften the peril the crew faces, but doesn’t make the story feel campy. I enjoyed the unique style of the illustrations as well as the very vibrant color choices. The linework is fluid, but doesn’t feel over polished and lifeless. Basically, once you read the tagline “Space, why you gotta be like that?”, you should know you’re in for something different.

The Not-So Good
The dialogue isn’t going to appeal to everyone. Some of the characters don’t speak with a sense of urgency like most space epics, and a lot of the action unfolds oddly, bordering on slapstick at times. Anyone looking for a closer Star Trek knock off will be left confused. That being said, it’s these parts of the story that have me so delighted by this tale. Once I understood the tone, I enjoyed the method of storytelling a lot more.

The Decision
I’m not 100% sold on Kaptara yet, but I will be buying the next issue for sure. The story is unique enough that I’m curious to learn more about their alien world. Like Professor Farnsworth, Keith doesn’t want to live on our planet anymore. Does Kaptara offer what Earth cannot? Just how badass is Skullthor? The mystery muffed appendage alone has me baited enough to grab Kaptara #2 when it comes out on May 20th.