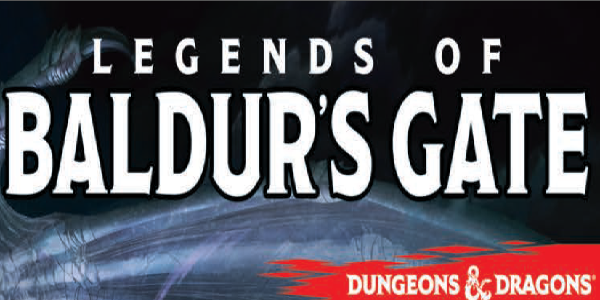 It’s easy to fall in to a trance-like state when someone talks about D&D (Dungeons and Dragons), because it’s all been done so many times before that you kind of wonder if there’s anything new under the sun relating to the medieval fantasy genre. If you are vaguely medieval European in style and speech and are using a sword and shield you’re usually meeting the bare minimum of the requirements; so reading a story wi 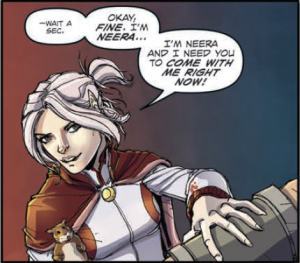 th more modern speech and pacing is just the deviation needed from the long-winded foresoothly spoken dialogue of the standard fare. Case in point, IDW’s Legends of Baldur’s Gate brings fans in to the larger than life fantastical city (which might sound familiar to you if you owned a PlayStation2), but instead of getting too heavily in to the fantasy tropes you might be used to, it introduces the protagonist who is more easygoing and has less archaic mannerisms and dialogue. It may be oversimplified, but in a world of thee’s and thou’s, it’s a refreshing enough change that makes the reading easier on the brain and the will. Our first experience with Delina the roguish mage is rife with missteps and awkwardness. Her personality is casual and entertaining, despite the desperation in her situation. She comes across as capable and intelligent, without being overpowered or dependent on deus ex. machina to get her through the plot. The modesty of her character’s proportions (and thorough covering) is also a welcome shift from the overly busty, buxom, lingerie models that usually permeate this particular genre. The volume eventually descends in to all out silliness, but is still a treat to read. Jim Zub maintains total command of the atmosphere and characters, and compared to his other work on the Pathfinder series for Dynamite, proves to be a capable humorist. He clearly loves the quirks of the world, whether it be action, adventure, or even politics and law enforcement, and he uses them effectively within the context of the story and the genre.

The art sets up a satisfyingly epic setting. John-Paul Bove creates interesting differences in colors and tones to properly represent the everchanging light of the different districts in Baldur’s Gate; and uses amazingly vibrant and eyecatching colors to represent magic, creating a familiar contrast similar to Ross Campbell’s work on the Pathfinder series. Max Dunbar handles both the action and characters’ detail quite well, and injects a bit more expressiveness, in facial expressions, than people may be used to seeing in this particular genre.  But it’s his design of Baldur’s Gate on the architectural level that’s the real standout. All the environments are diverse, and connect to each other, but still have all the differences in influence that have become a staple of this particular fictional melting pot. The city looks spectacular, and makes for a fun and exciting setting for the action, the only thing missing is the vibrancy of it’s people, but this could just be due to the fact that the story takes place at night when the city is essentially deserted.

All in all, Legends of Baldur’s Gate is a joke. Well not really, but it’s still funny and has some key action scenes that make an exciting edition to an already entertaining story. Fans of tabletop role-playing games are going to get the most out this one for sure, but it’s actually well-tailored for any action or adventure fan.  It doesn’t get too violent or go overboard in it’s content, so it’s a good fit for the younger audience. Delina is a great character with a lot of personality, and the dimwitted Minsc works as the perfect companion to her street smart attitude. Not a lot has been revealed about what’s actually supposed to be going on, as far as a main conflict is concerned, but Legend of Baldur’s Gate’s #1 is a good choice for new fans of fantasy adventure, who could do without the archaic speech and dramatis of similar stories.