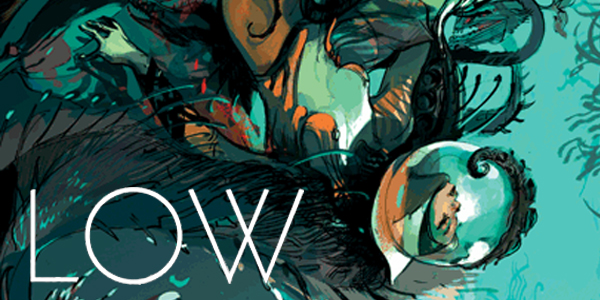 Stel tries to secure her family and her future before the air runs out in the newest issue of Low from Image Comics.

New today from Image Comics is Low #3, the next issue in the series about a futuristic earthen society that is forced to live under the sea. The story is written by Rick Remender with art by Greg Tocchini. Unlike the previous two issues, this one left me with a sense of hope, closer to the way Stel, the lead character, lives her life. We pick back up with the headstrong Stel who might finally have a piece of good news amidst an ocean of dismay and discourse. A probe has returned to the surface, and she thinks it has evidence of an inhabitable planet. However, no one has stepped foot on the surface in some time, mostly because it’s a suicide mission to get there.

Before Stel is able to head for the surface, she’ll need to procure a vessel. For that, she’ll need to talk to Senator Greeme who is currently in a “closed session” of the senate. I’ll tell you what it’s not, it’s definitely not a clothes section hyuck hyuck. Basically, what I’m trying to say is that Stel barges in on an orgy that spans a full spread. I can’t help but think Tocchini had to be a little excited when Remender tasked him with researching and illustrating an orgy. Unsurprisingly, the Senator is less than excited to see Stel while trying to enjoy mouth hugs from his new female friend. Ultimately, what’s happening is the leaders of this society see the writing on the wall. We learned in the last issue that the recycled air has become increasingly toxic over the years. The Senator confirms the speculation, and urges Stel to forfeit with them and spend the remainder of her days being pleasured in a drug induced haze. However, Stel’s optimism is far too strong to give up now. The two go back and forth, but eventually the Senator agrees to let Stel have a small craft, as well as the use of her imprisoned son. Before she can get away though, she does have to pay a price in exchange. We cut away before learning the cost,  but it’s probably safe to assume the Senator had one thing on his mind. I’d like to think that Stel wouldn’t agree to those types of terms, but desperate times and all that.

On the next page we find Marik, Stel’s remaining child, about to hang himself in his prison cell. We learn that he’s been beating himself up pretty badly about the events that transpired in the previous issue. The tragedies he has faced compounded with his recent misfortunes has pushed him as Low as he can go. In fact, the sight of his mother doesn’t end his resolve. Right before her eyes, he kicks out the stool and dangles by his throat from a bed sheet. The panels go black for a moment right after the guards try and take him down. It’s through the darkness we learn there’s still some fight left in him.

He wakes up in an underwater suit on the floor of a ship being piloted by Stel. To quickly summarize, the remainder of the book is a very thought provoking argument on shaping your reality. Remender has these two characters at opposite points on the mental attitude scale. Stel has been the optimist throughout this entire series, despite opposing arguments from various family members. The once positive Marik we met in the first issue has become a miserable wreck of a man with barrels of pent up aggression itching to be released. Marik demands that Stel let him off before she deploys, but it’s far too late. She was smart enough to start the voyage while Marik was still unconscious. This further maddens Marik, causing tensions between them to increase. The two argue back and forth until Stel delivers a line that everyone could agree with. It’s not important whether something is your fault or not, what’s important is how you react to it. What you focus on colors your reality. Basically saying, it’s not hard to see only the worst things in life if that’s all you’re looking for. While they’re arguing, the ship gets caught up in a giant floating fish corpse, causing them to have to swim the remaining distance to Poluma, a domed city that may or may not have supplies. It takes a little convincing, but eventually Marik and Stel leave the safety of their ship and venture out into the underwater unknown.

The suits they’re wearing look so cool. While walking in the ship, they more closely resemble what an astronaut would wear, but once they hit the open ocean, fins and a long ribbon like tail emerge. This results in the pair looking like a human fish hybrid. While they’re swimming we get three pages of fantastic illustrations by Tocchini as the two explore and interact with the deep sea inhabitants. In the end, they grab onto a couple of dragon like creatures, and decide to use them as some propulsion. As the story closes, we also get some of Stel’s thoughts. Just being away from the toxicity of the city already has her seeing her son’s true self for the first time in years.

Low continues to be an imaginative insight on a possible future for Earth. The world that Remender and Tocchini have created is both gorgeous to behold, yet terrifying to experience. Tocchini has a wonderful coloring style that lends itself well to a story set under the sea. The colors blend so effortlessly, causing a fluidity of motion in the panels. In all fairness, it’s really the story that has me keep coming back to this series. Remender started off by showing one of the saddest things imaginable in the loss of a spouse and children, and has me hooked on Stel’s optimism, while dwelling on the thought of will she ever seeing them again? It’s going to be a long month while waiting for Low #4, which isn’t due out until October 29th.