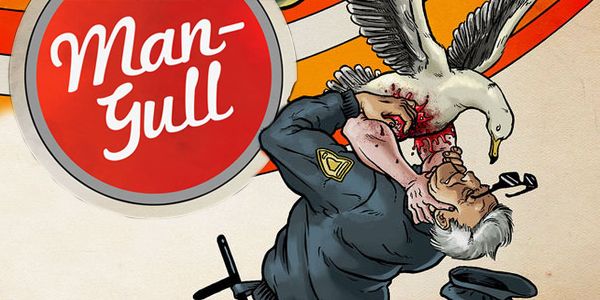 If you met a seagull with biceps, would you want two free tickets to the gun show?

I took a trip to Vermont for the long weekend, and took some time lake-side to catch up on a couple indie books that I picked up at Boston Comic Con. Top of my stack was the second issue in one of the most bizarre premises I’ve ever read. Put out by Stock*Pile Comics, Man-Gull #2, which is written and drawn by Rian Miller, follows the story of a serial killing seagull with man arms and the detective trying to bring him down.

Man-Gull #2’s opening panel shows a woman perusing the shelves of her local grocery store while a hooded figure is seen watching her. By the third panel she’s in her car driving home and talking on her phone, with her car being followed by a van. When the car stops and the woman gets out, the hooded man can be seen quickly stopping behind her. What starts as a dishonestly innocent return of the woman’s phone ends with her sniffing on a chloroform rag and laying unconscious in the back of the van.

From here we head to the hospital which is surrounded by news coverage following the previous issue’s adventures. We can see Detective Nick Obeks talking to his commanding officer Captain Mansfield, as another officer is seen approaching them. As it turns out, none of the video cameras seem to have been recording last night, which means no evidence of the Man-Gull. Doctor Tilling, the doctor in charge of taking care of the victim, Mr. Moxon, from the first issue is quick to accuse Detective Obeks of tampering with evidence. After being grilled a bit, Detective Obeks finally offers an explanation of how he found a large man in a black hood trying to suffocate Moxon. Obeks tried to stop him, but the man got away before Obeks could get a good look at him. Dr. Tilling seems suspicious of Obeks, but Obeks has an officer collect the doctor and take him down to the station for questioning, which allows the Detective some stress free time to further contemplate the case with his Captain. Obeks continues to lie about the perpetrator for fear that he’ll sound insane. Thankfully, before the Captain gets too suspicious, their conversation is truncated by the sounds of Moxon’s girlfriend screaming at an officer.

Debra, Moxon’s girlfriend is irate. The officers aren’t letting her see her boyfriend, and no one seems to be telling her what’s going on. Obeks fills her in on the attack the previous night, and reasons with her as to what she should do next. Due to concerns of more attacks, the cops have agreed to take Moxon down to the police station for the duration of his hospital stay. So, to soothe Debrah, he has an officer take her home to get a change of clothes, then to the station so she can be with her boyfriend. Obeks remembers his meeting with Julie, and tries to take off quickly, but it stopped by a woman from the EPA. She is trying to relay some important information to Obeks regarding the Moxon case, but Obeks is too preoccupied about being late for his meeting with Julie that he blows her off. I have a feeling this was a huge mistake.

While this is going on, Mo and another officer can be seen taking the statement of the husband of the victim from the opening sequence. He states that his wife had told him she had a surprise for him, to which Miller skillfully clues us into by showing a pregnancy test among the woman’s spilled groceries. We leave a puzzled-looking Mo at the scene of the crime to catch up with Obeks showing up late to his meeting with Julie. Obeks is trying to get Julie’s opinion on Moxon’s case but she can’t do much with stolen medical records and the postage stamp sized pictures Obeks took with his old fashioned flip phone. Mo calls him back to the station, where Obeks is forced into debriefing the entire scenario from the previous night. This takes so long that when Obeks is finally done, he doesn’t even have the strength left in him to talk with Mo about what he’s found. The two agree to catch up in the morning, and Obeks beelines over to where they’re keeping Moxon before heading home. I really liked how Miller adds Man-Gull’s silhouette in the night sky as Obeks leaving the police station, alluding to what’s coming next.

So, who the hell would be bold enough to break into a police station? A seagull with rippling biceps, that’s who. Without much effort, he is able to sneak in right through the front door, despite the guard stationed there. While this poor sap sips his coffee, Man-Gull is able to slip around him and launch a surprise attack. Man-Gull is able to wrap the guy in a choke hold with one arm, while pulling the guard’s pistol with the other. The guard pleads for his life, but Man-Gull is ruthless, and he blows the guy’s brains out. As the issue closes, we see who’s still left at the station, and who Man-Gull might meet next.

Man-Gull #2 is insanely fun and exciting. Never did I ever think I could be startled by a seagull, but Miller’s creation is down right frightening. After reading the first issue, I was anxious to see a lot more victims fall at the hands of the bird, however this issue spends more time on character development than bird murder. There seems to be enough unanswered questions to merit more from this weird tale. Like, what happened to the pregnant chick at the beginning of the story? What did the EPA lady want? And most importantly, who the hell taught this seagull to be such a badass? Hopefully Miller answers these and a lot more soon in the next issue of Man-Gull.