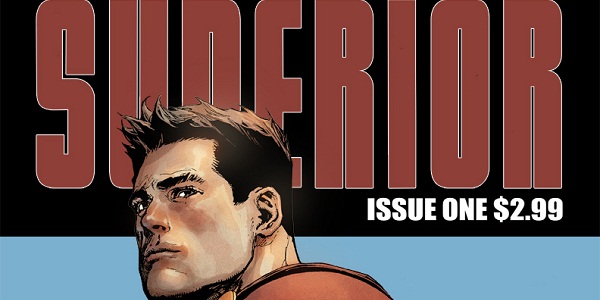 In a world where superhero comics are often regarded as lowbrow and childish entertainment, it’s nice to see a few writers taking the genre and flipping it on its head.  Dating all the way back to Alan Moore’s Watchmen and, more recently, in Mark Waid’s stellar series Irredeemable, creators have been delving into the minds of superheroes and giving them something much more important than bulging biceps and laser vision (though they often have those too).  They make their heroes relatable and susceptible to emotional strife even if they are physically invulnerable, and this is exactly what Scottish writer Mark Millar accomplishes with Superior.

Superior ran as a seven-issue monthly series beginning in 2010 under Marvel’s Icon imprint.  It was recently collected in a hardcover trade that’s unfortunately devoid of any additional content, like one of Millar’s funny letters for example, but it’s a great way for those of us who missed out on the monthly books to get our hands on the complete story and read it in one sitting. 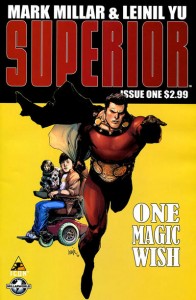 The story can be likened to that of the film Big if Tom Hanks were a muscly, invincible superhero, with a little bit of Avatar thrown in for good measure.  A 12-year-old boy named Simon Pooni has come down with multiple-sclerosis, rendering him unable to do most simple physical tasks like walking, brushing his teeth and wiggling his toes.  He used to be the star athlete at his school, but now he’s reduced to a kid who can’t bathe himself and gets called a “retard” at least once every other speech balloon by bullies.  He’s understandably bitter about the whole thing.  One night a monkey in a spacesuit appears and grants Simon, and Simon alone, the ultimate wish: to become Superior, the famous comic book/movie character and telling him that all will be explained in one week.  Simon first has to convince his best friend that he’s really Superior, and then he’s off to saving the world and using his newfound powers for good.  He eventually meets presumptuous reporter Madeline Knox, who is intent on finding out who he really is, and the story continues from there pretty simply, with some plot twists here and there.  It all leads up to a climactic showdown that is final-half-hour-of-Avengers levels of epic.

Sure, all of the superhero comic tropes are present; the hero having to come to grips with his new powers, a ton of conveniently-timed natural disasters to save people from, a busty and vivacious female news reporter and billions of dollars of destruction caused to New York City.  However, Millar infuses it all with so much charm and sincerity that it’s an undisputed joy to read from beginning to end.  Anyone who has ever been afflicted by an unfortunate physical ailment later in life can identify with Simon and can root for him when he gains back his movement in the body of a superhero.  Watching Simon push himself to use his new powers to their full potential, while reflecting back on the abilities he lost to MS, is quite profound.  It also helps that Millar has perfected the dialogue of his teenaged characters, and while this book isn’t nearly as hilarious or vulgar as Kick-Ass, it has more heartfelt and, dare I say, serious moments.  Simon really does develop as the story progresses and he learns to accept himself for what he is, and by the time he’s forced to make the ultimate sacrifice it’s hard not to care. 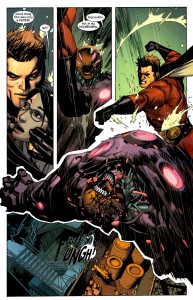 The pencils in the book by Filipino comics artist Leinil Francis Yu, who has previously worked on countless high-profile Marvel projects, are astounding.  Expressive faces, impossible levels of detail, everything that a comic book fan could want.  He frames the action and mayhem like it’s from a big-budget Hollywood film (the rights have been purchased to make this book into a movie, coincidentally), only with the benefit of always being able to tell what’s going on.

Superior could have been even greater than it is if Millar didn’t delve quite so deeply into well-tread territory towards the end of the story.  He started out with a truly unique premise and eventually turned it into something that we’ve all seen before.  Not everything has to be wholly original to be great though; Millar’s combination of gravity and lightheartedness, along with Yu’s stunning artwork, make this book a winner.