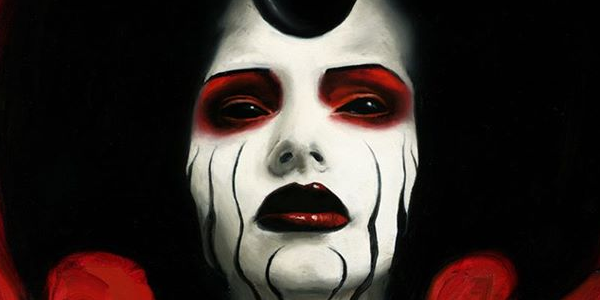 The most important lesson that I can impart to the next generation is that you can not trust a person that does not use contractions; especially if they are a memory-vampire hunting fetish model with a sword.

The Memory Collectors is a story about a pair of models who are inducted in to a highly select religious order of female warriors, who fight monsters that gain power by feeding on the memories of the people around them. These creatures are called (you guessed it) Memory Collectors. It’s written and illustrated by Menton3, along with guest submissions from writers Ben Templesmith, Ben Murphy, and Jason Mote and art from Ben Templesmith, Christopher Mitten, and Tony Moy. The Memory Collectors trade paperback compiles issues one through three of IDW’s own Memory Collectors miniseries in to a convenient compilation with an impressive section of quality fan art. 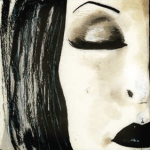 Which is fortunate, because the art is definitely the high point of this series, being that it’s absolutely stunning. The images are all paint on canvas, and the fact that an entire comic was drawn with this incredibly time consuming method is a feat all unto itself. Menton3 has a very distinct style when it comes to the human form. It’s surreal and almost alien, but it’s also very alluring and quite close to photo-realistic (even the monsters). The characters are all astonishingly detailed and have statuesque features that fit the Tim Burton during the 90’s atmosphere that seems to inspire the whole aesthetic.  Unfortunately since all the characters look exactly like porcelain dolls, their movements don’t seem fluid or natural. Attacks that are made seem wooden and stilted; and it’s partly due to the character’s incredibly exaggerated proportions, sometimes making the style act as a detriment to the action in the panels.  But also, their handling of the weapons just looks off. They look like models who have never held weapons before, and are only doing it for a photo-shoot. They don’t look comfortable or even practiced. They attack at odd angles, don’t always use the weapons’ edges, and even end up attacking from the air without jumping or providing any other indication of momentum. Progressively and choreographically, it’s an absolute mess. There’s no continuity. You will almost definitely get lost at some point.

Menton3’s art in the Memory Collectors is pretty, and tries it’s hardest to be brutal and Gothic; and at first glance, it succeeds. The terrifying monsters are detailed to an unsettling degree, The latex (yes…latex) gear that the heroines wear catch light and shine and give a real sense of texture, and the effect and border art choices are all overly dramatic but still fit the atmosphere. It’s very pretty art of very pretty girls. But pretty isn’t the same as good; and the only time art even becomes part of the equation is if the characters are in certain isolated locations. The only time texture matters is if it’s on a character or their costume. Every single environment is just a background of fog and silhouettes. They seem to fight on an ethereal plane, and that might even be deliberate, but it honestly feels like the story tries to avoid taking them in to highly detailed and complex situations and atmospheres on purpose.  And every time they end up doing something detailed it’s masked over by walls of text. The settings are all plains of concrete, graveyards, and flat landscapes shrouded in darkness and mist.  There’s even a scene in a monastery that is just a silhouette of vague shapes through a blurry lens. Then there’s the blood. It wouldn’t be a problem for an art style choice, but it’s supposed to be semi-photo-realistic. Yet blood doesn’t “flow” in a liquid form. It’s looks like it’s an aerosol.  It’s similar to an airbrush effect. Even when it’s on one the character’s clothes or body, it doesn’t look like it’s attached. But it’s all too easy to explain because it’s “the style” of the art. It feels like I’m bashing my head against a wall by trying to point out flaws in an art style. Don’t get me wrong, it’s all beautiful and picturesque and very complex. But it’s completely static. The characters all look like their arms would break in half if they bent them too much. To be frank, it falls completely apart when it’s in motion, and it’s only the characters and their clothes that are given the benefit of the tremendous amount of detail and quality that Menton3 proves he can do, but just doesn’t for some reason.

But I’m not an artist, so these are just my personal issues with the illustrations based on observation, not experience. The true test of my endurance of my reading The Memory Collectors, was Edith and her entire story. And it *was* a test. 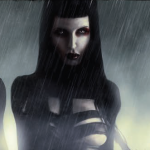 o begin with, Edith’s name is not mentioned for a bit, so I started jokingly referring to her as Lilith, in my notes. Imagine my shock when I realized how close I was. Lilith(Edith) speaks dramatically, but in very basic English. She’s tries so hard to sound smart, and uses words and phrases that don’t fit with the natural flow of her speech pattern. It’s maddening. Have you ever talked to someone who doesn’t use contractions? That may sound weird, but stay with me on this one. 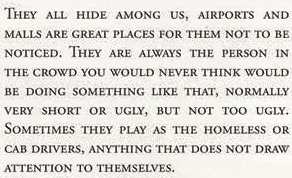 Lilith(Edith) doesn’t use contractions.  And since she’s so tragically modern, her struggle to sound like she’s from Victorian London makes her seem even more like a parody of the character that she’s trying to be. She also refers to everyone and everything by categories. Everyone is part of a particular group, or is referenced by their job or title. Since this is how Lilith(Edith) thinks, she doesn’t give the impression that she’s a loner or an outcast.  Instead she comes off as a materialist, who’s obsessed with station and has a God complex.  From the first page of her lengthy explanation of not fitting in, it’s clear that her so called “exile” is self imposed and based on feelings of superiority.  She reads like a female Patrick Bateman. She never passes up an opportunity to drop in a proper name, or place, or profession. It’s seriously like reading the thoughts of a serial killer. Since she projects the detachment associated with a God complex, she never once bothers to relate to the audience or define any relationship to humanity as a whole. Her attitude is as static and disaffecting as her facial expressions. So when a moment that’s supposed to have emotional significance finally does come along and Lilith(Edith) starts describing those emotions, she does so from a standpoint of form and function without empathy, completely pulling the impact out of scene. The sad truth Lilith(Edith) is that I don’t care about how the events around you are affecting you on an emotional 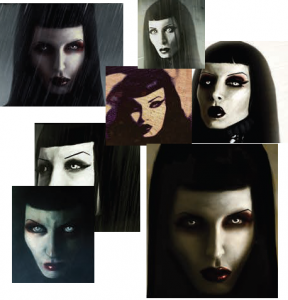 level. The reason I don’t care about them, is because you don’t care about them. You describe emotions without actually using the word “feel”, which makes me think you might be a sociopath. You’re completely static, lifeless, and boring. Every panel you’re in involves you posing in some way, or looking at the camera. Despite your “calling”, your focus on appearances is completely distracting me.  You aren’t giving me enough of a reason to have an emotional investment in her situation which seems to be focused on keeping herself from being normal. She was more obsessed with finding ways to stay special, to give the appearance that she’s interesting.

You see what I did there? I changed perspectives and tenses. I was talking to Lilith(Edith), then I started talking about her like she wasn’t there. Were you confused? Well get used to it because Memory Collectors changes perspectives on the fly, uses past and present tenses in the same sentence, and just plain leave out words.  Lilith(Edith) will ignore you one minute then demand you join her story as if it’s been told directly to you the whole time, and you just weren’t listening. It’s insulting, arrogant, and bloated, amateur writing. The art, which I stand by because it’s really good, can’t even save it all the way through. Lilith(Edith) suddenly will get very talkative and erect these massive page swallowing monuments of words that will describe amazing and abstract conc

epts in fantastically pedestrian detail with very little regard for unimportant things like writing style, proper grammar, and spelling. THERE IS NO EXCUSE FOR BAD GRAMMAR AND SPELLING MISTAKES IN OFFICIALLY RELEASED WORKS!

I’m struggling to try and convey to you exactly what makes The Memory Collectors’ story as terrible as it is, and my main fear is that you won’t see all these problems; and that makes me worry for humanity. Prior to writing this, I took a little trip down Google Lane to find out what the general opinion of Memory Collectors was, and I was completely baffled by the results.
Bloody Disgusting said: “…this comic stands on a higher realm.”
Popmythology says: “…This isn’t a comic that’s read – it’s *experienced*.”
UnleashtheFanboy called it: “… nothing short of a quality yarn.”

Menton3’s Memory Collectors has a lot of really good points. It’s stylish as hell, with some beautiful hand-painted panels of incredibly sexy heroines (in a Clive Barker kind of way). Even the concept itself has a lot of potential. Substantiating the random feelings of despair people sometimes get, and introducing a way to describe sudden memory loss has a draw all on it’s own. But then it starts “talking”. Lilith(Edith) hates you and hates everything, and then hilariously tries to make you care when she experiences loss. She’s selfish, childish, vain, dramatic, and arrogant. She doesn’t posses a single redeeming character trait, yet she’s our throughway to the story. Which is so incredibly abstract that it can’t be conveyed through the panels, it’s all broken down and explained in massive bouts of exposition. If I had to put a number to it I’d say that 75% of the story is spent talking on these huge walls of text, and only 25% is spent on showing you all the cool things you’re reading about. I’m not saying that Menton3 can’t tell a story, but a comic book is the second worst format for this kind of recondite concept (first is interpretive dance). Now to be mean.  Menton3 can’t write. Sorry…he can’t.  The works from the other writers aren’t great, but they are leaps and bounds ahead of the main leg of the narrative which is a nightmare to get through. Spelling and grammar aside, he lacks any real style in his writing, his dialogue is far too convoluted, and the work itself has no intelligence behind it.  A deus Ex Machina is introduced that is so embarrassingly obvious as a way to end a story that is going nowhere, making everything that happened before seem just that much more asinine.  It’s so hard to take seriously as a published work because it’s so incredibly amateur. It’s a collection of good ideas, and a complex and distinct design of fiction that’s written with a crayon by a 3rd grader. You know that apprehension you get when your friend asks you to read their Twilight fan-fiction?

It’s not a good feeling, is it?