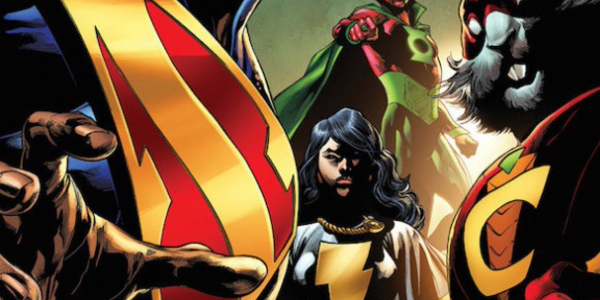 DC opened up the gates to the Multiverse, giving the keys to one of their top writers Grant Morrison. Does this universe of heroes we recognize in name, but aren’t our typical heroes, live up to the the hype?

For years not Morrison has been working on his own vision of the DCU, creating characters and story lines that have fans calling for his resignation. Some love him and some down right hate him, but in the end he is just the it writer for the DC universe right now. I remember in the 90’s when he was working on JLA, I could not get enough of his stories, and then he jumped over to X-men. My enthusiasm for his writing disappeared, and frankly has never returned. As a life long comic reader I know that things change, so from time to time I still try to check out his work.

DC sent over an early copy of the newest book from Morrison, and frankly the ideas behind the book aren’t bad, but the execution falls flat. After reading through the book twice, there are just some faults, that leave me wondering what happened. Morrison breaks the forth wall in the book making the reader part of the story, but there are a few side panels that just don’t fit, making it seem like the reader would need the whole graphic novel to understand the importance. The other factor that pulled me out of the story was introduction of Earth 8, a world like Marvel. I know the two companies borrow ideas from one another, but in this case it looks and reads like an Avengers title. A character hear or there, but a full throw down between the DC characters and the Marvel-like ones was too much, not to mention the blatant Savage Dragon rip off.

The art work is the one thing that saves the book, capturing the DC characters in different forms. Ivan Reis does a wonderful job bringing Morrison’s words to life, and is able to blend the Marvel and DC characters. Along with the art the one thing that saves the book is the inclusion of Captain Carrot. The comic relief of the book, makes it easier to get through the muddled story, and make a campy character a real hero.