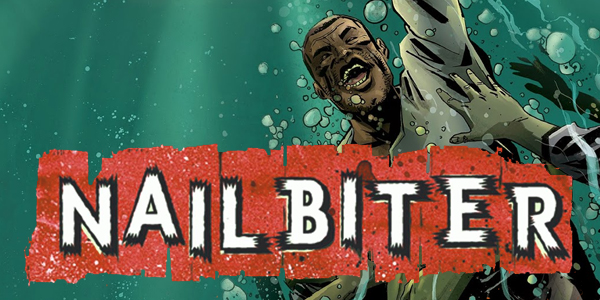 The crazy bus driver is threatening to cleanse the youth of Buckaroo, but will Crane and Finch make it just in time to see the bus fly by?

Image Comics released the next installment to the Nailbiter series last week. Nailbiter #10 is written by Joshua Williamson with art by Mike Henderson, and color by Adam Guzowski. At the end of the last issue, a bus full of local kids have gone missing, taken by the bus driver. Will Crane and Finch make it or will this be the last bath these kids ever get?

The Skinny
Mr. Crowe has the kids poised for a swim in the yellow submarine, but it’s not a submarine, it’s a school bus. Finch and Crane are trying to help, but they’re running out of time and have no idea where Crowe is. Thankfully they get some much needed help from very unlikely assistant.

The Good
This issue was nice and suspenseful, following the cliffhanger in the last one. Admittedly, I’m glad the scenes with the kids are done for now, because I’m ready to get back to the hunt for what’s really eating the town from the inside. Again, the creative team leave us with another great hanging ending. This time Finch is about to do what he does best. I still really like the art of this series. It’s easy to with all the really impactful panels getting the attention they deserve. Despite how I feel about it, you’ll see, seeing that full page illustration of Crowe’s last breath hit like a haymaker. It shows what good pacing and plot build up can do for a scene twist like that.

The Not-So Good
I’ve been on board with this creative team for the duration of this series, and despite how exciting this issue was, it felt a little rushed. Both in the story and in the art. I expected they wouldn’t kill off a bus filled with children, but the build up was so much that the event itself felt anticlimactic. Like, aren’t the bus doors designed to not be easily opened from the outside? Finch gets in with ease, despite the water putting pressure on the door. Seeing some suspense with him trying to pry the it open would have made the scene build at the same tempo as the lead up. Some of the kids faces looked a bit rushed too. I know not everyone has a perfect face, but one or two of them didn’t look human. My biggest gripe is the scene where Crowe gets it. Really? No one saw the girl walking up behind him? Looking at the previous panels, she comes up to his nipple in height, so apparently this girl has some serious ups and deadly knife training. It was interesting to see that the kid’s urge for retribution is that deep seated, but the scene felt a little heavy handed.

The Decision
Despite my thoughts about the bus scenes, I’m still loving the crap out of this series. We’re teased with the viking looking dude again, alluding to something larger going on in the background. Seeing where we left off with Finch makes the cover for the next issue make way more sense. It’s going to be very interesting watching him work, with the only thing separating him from Warren being a badge. But even so, Finch went too far in a past interrogation, and put his job at risk. We’ll see if he’s able to control himself when Nailbiter #11 comes back in April, following the Hack/Slash crossover next month.