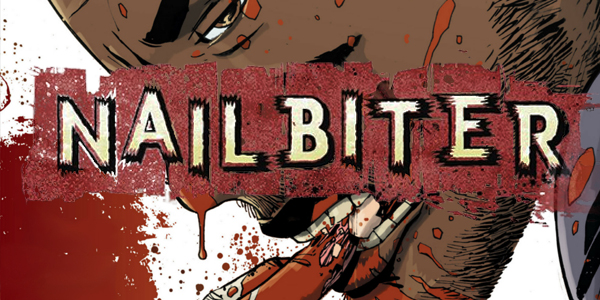 Things are getting bloody in Buckaroo as new information is brought to light.

Last week, Image released the first issue of the second arc for the Nailbiter series. Nailbiter #11 is written by Joshua Williamson with art by Mike Henderson, color by Adam Guzowski, and lettering by John J Hill. The issue wastes little time, and puts us back into the Nailbiter’s kitchen, where Finch has him all wrapped up.

The Skinny
Finch isn’t playing nice anymore. He has Warren tied up in his kitchen, and is attempting to beat some answers out of him. However, Finch has to rely on more than just his army interrogator experience to crack this nut, forcing him to employ some non traditional tactics to get ol’ Warren to squeal. Meanwhile Barker wakes up in a cage next to the beekeeper. The two talk a bit about secrets before the beekeeper’s time is cut short when their captor comes back. It’s clear she has to escape, by any means necessary.

The Good
The suspense in this issue was fantastic. Between watching Finch lose his patience and seeing Warren lose his mind, the story had me turning pages lighting quick. It helped that the art features some great full page images that contrast the very cut up and sequential build up, like where Finch is being tested and the bee man is being dissected. Also, there’s a new character in a bloody apron that has my curiosity peaked.

The Not-So Good
I really liked this issue. The whole thing felt very on point, but nothing is perfect. Because I had to dig a little, I’ll agree that it is a less important detail, but Finch has shading under his eyes that make him look like he’s wearing eye black like a baseball outfielder. A lot of the other shading is more subtle and natural, so I found this to be slightly distracting.

The Decision
This is definitely my favorite issue of Nailbiter thus far. With seeing Finch in his element, watching Warren freak out over Finch’s secret weapon, and meeting a new nefarious character that could be responsible for all of Buckaroo’s woes, you bet your sweet patootie I’ll be purchasing Nailbiter #12 the day it hits shelves.