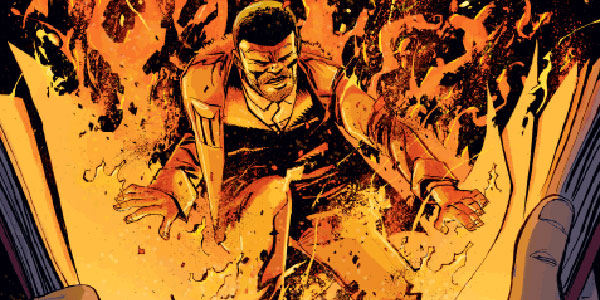 Williamson and Henderson continue their sadistic story of serial murder and dismemberment eloquently, allowing readers to meet the man behind the book’s title at the start of the story.

I was eager to read the second installment of Image Comics’ Nailbiter series. Edward Charles “Nailbiter” Warren is an intelligent, well spoken yet tormented man, that would stand somewhere between Hannibal Lecter and Dexter in the serial killer spectrum. Warren is quite crafty, somehow eluding a guilty verdict time and time again (OJ Simpson would be proud). My favorite panel in the book has to be the close up on Warren’s happy face while he’s hook deep in heifer.

Officer Crane and Agent Finch continue searching for the missing Agent Carroll, who happens to have found mysterious information on a connection between the killers. Some of Carroll’s notes were thought to be safely kept in Finch’s motel room, but a big creepy dude in a skull sets the place ablaze. Finch arrives before it’s too late, but while he’s saving the notes, it looks like he found a crispy version Carroll. While the morgue does some tests, we get to learn a lot more about who Crane and Finch are, as well as some of the other sickos that called Buckaroo their home.

The book has some other twists built in, and is doing a good job of building a suspenseful suspicion about how Warren did all this.  The art is a beautiful contrast between dark and eerie panels mixed with vibrant and energetic ones. I also like that there’s a bit of humor in the story, albeit grim in nature. Maybe it’s just what happens when you get too close to Buckaroo– you start finding death and gore a little bit funny. I’m not ashamed to admit that I’m champing at the bit for the third issue.