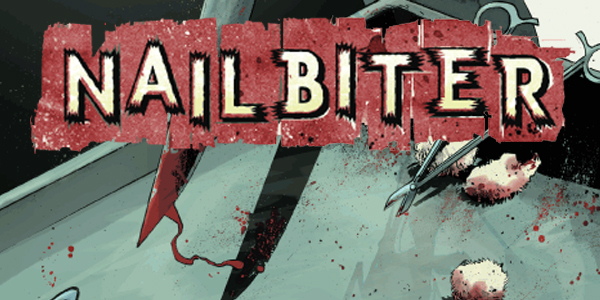 Nailbiter #3 continues creeping people out with the story about serial killers from Oregon.

Image Comics also released Nailbiter #3, a continuation in their story about Buckaroo, Oregon, birthplace of 16 of the world’s most notorious serial killers and psychopaths. The story is written by Joshua Willamson with art by Mike Henderson. What you’ll find past the bloody surgical table on the cover, is an issue that picks up this sinister story where the last issue ended. You know, like most serial comics do.

We start with a glimpse of Edward Charles “Nailbiter” Warren, being a normal civilian, pruning his rose bush. A very interesting setting for a man that is accused of murdering people that bite their fingernails and chewing their fingers to the bone. He’s surprised by some visitors, and they aren’t interested in his roses. Turns out some of the local townsfolk don’t like the idea of a boy, murdered, and strung up on a sign in the middle of town (end of last issue). They assume that the serial killer, who was just acquitted on another round of murders, might have something to do with it. This team of knuckle draggers put on their best ski masks and creepy bandanas and get to dishing out mob justice.

Word about the attack gets to Officer Crane and Agent Finch, the team currently looking for Finch’s friend Agent Carroll. The pair contemplate their actions, but being righteous folk, decide it’s up to them to save the serial killer. Williamson also doesn’t let us forget that Crane and Warren had a past together, which could play in even more later in the plot line. The pair manage to save Warren from hanging in a pretty exciting way, which Henderson illustrates stupendously in an exciting series of three pages.

All this stuff happens, and we haven’t even made it to the scary stuff yet. Officer Crane and Agent Finch take Warren back with them for his own protection, and put him in a cell. We get some revealing dialogue showing Warren attempting to feel love, but finding it difficult when his reputation precedes him. I enjoyed this part of the story. It feels like Williamson wants the reader to almost feel bad for Nailbiter.

After the cell scenes, it’s down to see Morty in the morgue. Fun fact, Morty’s dad was one of the Buckaroo Butchers. His name was Gravedigger, because he liked to bury people alive. Anyway, we get a look at the pair of bodies they have on ice. One is the boy Hank that was hung up on the sign. At first glance his fingers look chewed, but on a closer examination, it’s clear that it’s a copycat crime. The other body was the charred up one they pulled from the fire, that might be Agent Carroll’s. Wrong again, it’s really the Book Burner, the original Buckaroo Butcher, whose body should be buried in a cemetary already.

While all this dialogue and detecting is happening, the lights keep flickering, and the viewer gets these creepy glimpse of a hooded slasher preparing to strike. Very Scream like, the killer creeps up when no one is looking, and makes the town of Buckaroo have to find a new mortician. Officer Crane tries to catch the killer in the act, but in a spooky turn of events, ends up holding an empty sheet. The book ends with the duo of bird names heading to the cemetery to find out why the Book Burner was in the morgue, and who took his place.

Nailbiter #3 raises the bar for this series. Now that the plot has truly set in, it’s clear that Williamson and Henderson are having fun creating a suspenseful world filled with heart racing action. The story feels well thought out, with red herrings built in to keep the truth hidden. I look forward to digging into the next issue as soon as it hits the racks.