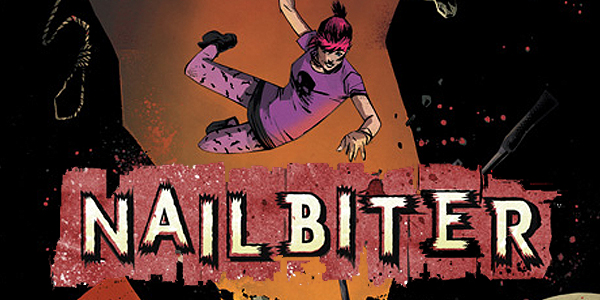 Have you ever wanted to taste human blood?

Image Comics released the fifth installment to the Nailbiter series last week. Written by Joshua Williamson with art by Mike Henderson and colors by Adam Guzowski, Nailbiter continues its look at the inner workings of serial killers. We left Agent Finch and Sheriff Crane in the last issue right as they found FBI Agent Carroll, beaten and tortured to within an inch of his life.

We open with a look back at the criminal interview of Charles “Nailbiter” Warren given by Agent Carroll. Carroll seems to drill Warren for the answers, to which Warren responds with snark and difficulty. Carroll suggests that there’s something bigger going on, a mastermind if you will, pulling the strings. Warren tries to warn him about the cost of his curiosity to which Carroll pays little mind. However, as we turn the page, we’re reminded as to just what Warren was warning him about. Henderson illustrates a horrific looking Carroll with his mouth stitched shut about to lose his left hand at the wrist.

We jump back to the present and find a now peaceful looking Carroll asleep in his hospital bed. It seems that despite the large amount of loss blood, Carroll is still kicking. The story of where Finch and Crane find Carroll gets fudged slightly as to not raise too many concerns about the cave underneath the first Buckaroo Butcher’s grave. The pair decide to check back in with Warren, who’s in a protective custody back in the cells. He’s not alone though. Alice, the gloomy teenager from the previous issues is there interviewing Warren about his process. When Finch and Crane find Alice this close to a known serial killer, they’re obviously furious. They tell Alice to go home and release Warren, on a count of not caring anymore whether or not he’s protected. Warren seems ok with their decision, and informs them he needs to go see Raleigh down at the Murder Store. From here, it’s off to Robby’s parent’s house to give them the sad news. Robby saw his end in the previous issue, but his parents seem unaware of his late night tendencies. On further inspection of his room, Crane and Finch find a box filled of death causing devices that leads them in the same direction at Warren, right to Raleigh and his Murder Store.

By the time they get to the store, it’s too late. Raliegh has been dismantled by a deranged warrior dual-wielding cutlasses. It’s pretty clear that this killer made short work of Raleigh and has turned his attention to burning down the house. Crane and Finch catch a break and catch the killer unaware. Crane and Finch bury three slugs into the killer’s chest and leave him in a clump on the floor. But not for long. While talking, they lose track of him, which Finch will pay for dearly. A flaming shelf of knick knacks comes barreling down on Finch’s shoulders pinning him to the ground. It looks like this is it for Finch, and as he’s stares down his killer he speculates that his unknown killer is really Warren. One catch, just as Finch is about to be cut so good that he wish he wouldn’t have been cut so good, Warren flies in from the blindside and lays the killer out. Faith in Warren is quickly diminished when it’s seen that he and this new killer know each other. The killer challenges Warren’s motives and gives him a choice. Either save Finch and Crane or get the answers he’s looking for. He quickly makes his decision, and we can see the killer slipping away as Warren is left to save Finch from the fiery shelving unit. From here we jump to the Buckaroo Urgent Care Center where we catch up with the battered but alive Crane and FInch visiting the comatose Carroll. The two are trying to figure out the identity of their new friend with the knives but come up empty. As we leave these two, we’re left with a bombshell. During a quick coffee run Crane is met by Agent Abigail Barker, who is in Oregon about Agent Finch. Barker becomes quickly distracted by the presence of Agent Finch, mostly because he’s supposed to be on trial for murder.

We end with the juiciest bit of this issue. We see some excerpts from the notes of Agent Carroll about how he’s becoming obsessive over the search for the source of the serial killers. However, the imagery is telling a much different story. We see a girl telling her parents that she’ll be busy with her homework, but they don’t care. The tv is on, which is clearly way more important. Carroll continues by justifying his work. It’s not just future victims he’s trying to save, he’s also trying to save the souls of future killers. And in the last panel, we see a very suggestive shot of Alice standing in what looks a lot like a murder den. It’s not certain whether she is, as Carroll suggests, a future killer or if she’s a proactive citizen and is trying to crack the case herself. Looks like we won’t know any more until October 1st.

Nailbiter #5 continues to dig in, dragging its reader towards clarity tooth and nail. It seems like Williamson isn’t too attached to anyone in his cast, and could have death scenes planned for the majority. I really like how dynamic of a character Warren is proving to be, because as he admits, he is the star. Henderson and Guzowski continue to create a world that makes the hairs on the back of your neck tickle. In a series where anything can happen with a turn of the page, Henderson and Guzowski paint the perfect stage to make each movement cautious. Judging by the cover art, it looks like we’re going to get a look back at Nailbiter’s early years, hopefully to find out what went so wrong.