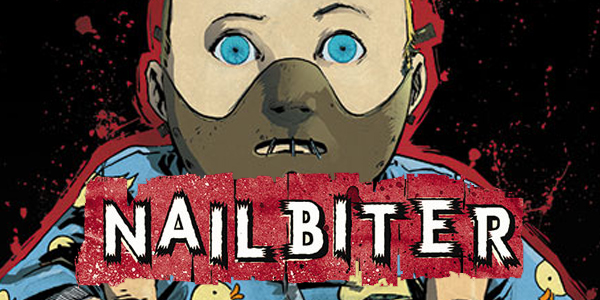 Nailbiter #6 from Image Comics asks if a baby is born in Buckaroo, Oregon is it doomed to a life of murder and mayhem?

Image Comics released the sixth issue of Nailbiter this past week, a story written by Joshua Williamson, illustrated by Mike Henderson and colored by Adam Guzowski. This issue deviates from the tempo I’ve come to expect from this creative team. At a pinnacle moment in the story, we take a break from Finch’s murder trial, Carroll’s rehabilitation or Alice being influenced by the mind of a serial killer. Instead, we take a more character centered look at the relationship between Crane and Alice as they tackle a comedic relief adventure involving a pregnant woman hellbent on stardom.

After Alice’s intro, followed by a look at her room as she’s writing in her journal (I was happy to see Alice is a Title Fight fan) we head to the diner to watch the meeting between Alice and a rather pregnant woman named Mallory. Mallory has issues to say the least. She isn’t satisfied with just being into the murderabilia, she is convinced that if she gives birth to her kid within Buckaroo, that the baby will have no choice but to turn into a serial killer. She goes on to show us how magnificent this messed up life would be for her. I really enjoyed these three panels that take us through Mallory’s life. Henderson draws a sadistic smile that spans ear to ear on the aging son, as he’s seen devolving into a full fledged murderer. This would obviously transition itself into book deals, tv shows, heck maybe even a movie. It’s the modern day American dream.

The trip to Mallory’s fantasy island is cut short by the pain of a contraction. The baby was apparently due yesterday, so the pair make haste to the ER. Once inside, they are greeted by a nice doctor who tries to ease Mallory’s mind and get her ready to deliver. She thanks him by shoving a syringe through his cheek flesh and screaming about how they can’t take her baby. Mallory runs off and Alice tends to the doctor. Obviously the cops get called, and it doesn’t take long for Crane to find out that Alice is tied to the mess. The interaction that transpires when Crane asks for Alice’s help struck me as odd. Williamson is writing Alice to be your typical overreacting teenager, filled to the brim with angst and anarchy. However, she has this bipolar reaction over the span of a page turn, and completely changes her tune when Crane doesn’t beg for her help. The two continue talk, and we learn why Crane is so interested in Alice. Without saying it specifically, it can be deduced that Alice resembles a younger Charles “Nailbiter” Warren. Maybe Crane feels slightly responsible for Warren’s fate? The two ultimately agree to help each other, and go searching for Preggers McCrazypants in all the local barns.

Thankfully, we skip all the empty barns, and pick up with Crane and Alice at the one where Mallory’s hiding. Alice and Crane walk sheepishly throughout the property, trying to get the drop on Mallory, but instead instead, they are being followed by Mallory. She waits for just the right moment to strike, and when Alice and Crane aren’t paying attention, Mallory starts to swing a bat at the back of their heads. She is halted by another contraction, and her cover is blown. The three bicker some more, but you can’t stop mother nature. This baby is coming, and it’s up to Alice and Crane to deliver. We can see the tension on Mallory’s face as she gives her final push, but the creative team save us from viewing of the joys of childbirth. So we see the newborn baby being held in Mallory’s arms, and we learn that her baby girl might even stand a chance in life, because the barn was outside of Buckaroo. What can you do? We close this story on a heartwarming note. We see Mallory get some psychiatric help, embrace her newborn daughter and see Crane give Alice an atta boy as she drops her off at home. We learn all this through the diary of Alice, but on the last page we get a closer look as to what she was really writing. With the closing page, we’re left to wonder how much like Warren is Alice? Is she crazy?

Nailbiter #6 is a fun read as long as you aren’t hellbent on progressing the main story line. I have been enjoying where this story is going, and really want to know what happened to Carroll, what’s going on with Finch and how the hell everything’s connected. So, that being said, I was a little disappointed to learn I had to wait a bit longer to find these things out. Instead we get an enjoyable look into Crane and Alice’s relationship and how they tick. But even then, we’re still left to question what’s really going on with Alice. I like how Williamson is writing Alice’s character thus far. She appeared as a small blip on the radar in the first couple issues, but is slowly growing into one of the major players. It appears we may not be getting answers in the next issue either, seeing how Brian Michael Bendis will be temporarily joining the creative team so they can pay homage to Powers #7. Williamson writes in the Nailclippings section that although it’s a tribute issue, there will still be some heavy secretes unearthed. We’ll see how true that is when Nailbiter #7 comes out November 5th.