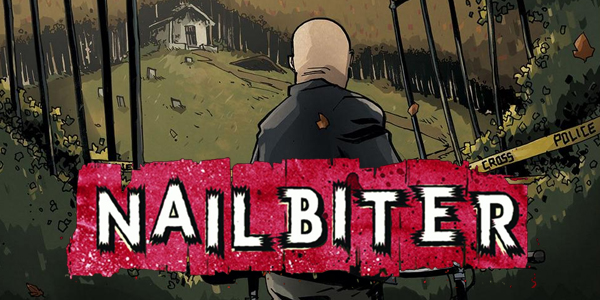 Image Comics release Nailbiter #7 has Brian Michael Bendis heading to Buckaroo to research serial killers, but he ends up biting off more than he can chew.

Last week Image Comics released Nailbiter #7, the next chapter in the story about a town that breeds serial killers. Aside from continuing to tease their readers with subtle clues and hints at the root cause, writer Joshua Williamson and artist Mike Henderson decided to include famed writer Brian Michael Bendis into the issue as a tribute to Powers #7. Bendis comes to town to research serial killers for a new book, but ultimately bites off more than he can chew.

The issue jumps right into the action, showing a bugged-out Bendis running for his life amidst black panels. After the four panel teaser, we Tarantino it back to when Bendis showed up to Buckaroo, and learn how he winds up in this mess. The first person Bendis talks to is Officer Crane, who is less than amused by his presence. She eventually allows him to interview the townsfolk, but warns him that any harassment on his part will earn him the boot. Crane drives off quoting Nietzsche, which tickles Bendis’ fancy. We then jump to the Buckaroo hospital where Agent Finch is talking to the newest arrival, Agent Barker in the room of the sedated Agent Carroll. When we left the pair back in issue #5, Barker was surprised to see Finch due to his pending murder trial. It sounds like Finch was a bit too aggressive during an investigation, and went beyond simply beating out a confession. We can see Bendis hiding under a window, so he’s able to eavesdrop on the entire conversation. Barker and Finch continue spelling out some more details of Finch’s case, like the guy he killed was no saint. So bad that Finch seems confident a jury will find him innocent. Once Bendis gets enough dirt, he speeds away, to find his next interviewee.

The next spread is fantastic. Thirty four smaller reactionary panels depict the prevailing disinterest of the residents of Buckaroo to Bendis’ interviewing, with a handful simply showing various residents flying the bird. After all these quick responses, Bendis finally meets someone who’s willing to talk, who also happens to be the older brother of The Whistler, a guy that whistled while he wrecked. What I found most interesting about this interaction is that Williamson alters the focus to the family of the murderer, to show what it’s like for them having a family reputation of murder. The man has a young son, and dreads the day when he’ll have to tell him. Bendis asks why he doesn’t move away, to which the man replies because this is his home. Eventually the man excuses himself to take care of his kid, and Bendis’ attention turns to another Buckaroo resident he’s yet to meet.

Edward Charles “Nailbiter” Warren apparently is a huge fan of Brian Michael Bendis, and has some questions, as well as a large stack of comics for him to sign. Bendis is bothered that The Nailbiter is a fan of his, which offends Warren slightly. The two continue to talk, and Warren tells Bendis that the pair are more similar than Bendis is willing to admit. In a beautiful two-page spread, Warren spells out his argument. Though Bendis might not have killed a person in real life, he’s offed countless numbers of our favorite fictional characters, including Peter Parker, Professor X and Hawkeye, just to name a few. Bendis disagrees to the connection, but Warren puts up a strong argument in defense of it. Although these characters aren’t of flesh and bone, our affinity for them isn’t any less. When we see our heroes fall, it could be as sad as losing a loved one. Warren also warns Bendis to be careful how far he digs, because eventually he will find a darkness in himself that he didn’t know existed. Bendis tries to ask about the first time Warren actually decided to murder someone, his murder moment if you will, but Warren disappears before he answers it. Pretty creepy, but not nearly as bad as what’s to be found in the serial killer graveyard.

In the serial killer graveyard, Bendis comes across the same grave that Finch found Carroll in. Bendis descends down a rickety rope ladder, all while cursing himself for being this curious. At the bottom of the ladder all Bendis finds is darkness. He pulls out the flashlight on his phone to allow him a little light. From deep in the darkness comes an eerie tune, which startles Bendis slightly. He tries to call out, but the whistling continues. As he turns to run away he sees some hieroglyphic style images on the wall, drawn in blood, however he’s not able to stay long. The whistler continues to draw closer, causing Bendis to drop his phone and run into the darkness screaming. Now that we’re back to where we were in the intro, Bendis’ shouting pays off. He finds Crane amidst the darkness, and she offers to take him back to Portland. When asked what she was doing down there, Crane responds with the simple answer of police business.

The next page shows Bendis addressing a group of fans at a comic book signing. Someone asks about the horror story he was supposedly writing, but Bendis says he dropped it because it got too dark. Before the end of his signing, Bendis is handed a note that reads “I let you live in the caves, but I’ll be watching you”. We leave Bendis looking like he might have just soiled himself a little. In an epilogue, we see Finch and Crane back at the hieroglyphics. It seems most of the stuff Bendis saw was new, but there are some much older examples farther down the wall. But what does it all mean?

Nailbiter #7 is clever, cool and creepy all rolled into a 24-page thriller that pays tribute to Powers. When I had heard the original concept of Bendis coming to Buckaroo, I didn’t see how it could play into the storyline. Again, this issue deviates from the structure of the first five books, but it’s refreshing to learn things in a different way. A little divisive about Bendis being able to hide under a window so two FBI agents couldn’t hear him, but the information we learned during that conversation is crucial. The art is still excellent because Henderson never pulls any punches, making sure every expression is accurate and every scene is enthralling. It only helps us readers dive headfirst into this story, and feel like we too we’re palling around with Bendis. Williamson teases that the next few issues are darker than any of the previous issues, so I can’t wait until Nailbiter #8 comes out on December 3. Looks like the next issue is all about that bees.